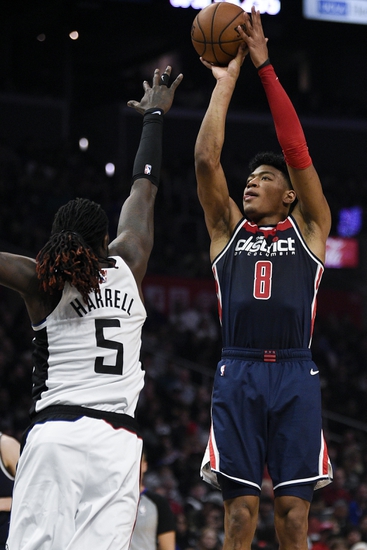 A clash of styles will take place at Capital One Arena on Tuesday when the fast-paced offense of the Washington Wizards (6-12) will host the deliberate, defensive-mindedness of the Orlando Magic (8-11). Washington is struggling as of late, dropping four of its last five contests, while Orlando has won two of three to put it up into the top eight of the Eastern Conference.

The Wizards return home after a four-game road trip in which their already struggling defense completely fell apart. Already ranked 30th out of 30 NBA teams in scoring defense allowing 122.7 points per game, Washington allowed an average of 131 points per game on the road trip, capped by 150 scored on Sunday against the LA Clippers. The Clippers’ numbers were staggering, with Kawhi Leonard scoring 34 points with six rebounds, Paul George adding 31 points and eight rebounds, and Montrezl Harrell and Lou Williams coming off the bench to add 23 and 22 point respectively. Harrell also had 15 rebounds and Williams had eight assists.

The Clippers held Bradley Beal relatively quiet for a player who ranks fifth in the NBA in scoring with 28.0 points per game. Beal scored 23 with 11 assists, but Rui Hachimura led the Wizards with 30 points and nine rebounds. Davis Bertrans added 20 points off the bench, while Isaiah Thomas scored 16 points in the loss.

Offense, however, will never be Washington’s problem. The Wizards rank third in the NBA in scoring with 118.8 points per game, but it is tough for them to win games that they are allowing the other team to shoot 55.3 percent from the field and 43.8 percent from 3-point range while getting out-rebounded 52-43 like the did against the Clippers.

Orlando’s results as of late may appear to be better, the offense is struggling. The Magic failed to score 100 points in their first seven games of the year, but then the offense caught fire, scoring 100 or more in six straight games. But since that time, it has been a mixed bag, with the Magic breaking 100 in just three of six games, including their most recent 100-96 victory over Golden State. Orlando’s offense ranks dead last in the NBA, scoring just 101.0 points per game.

While the deliberate pace that Orlando plays has a part in why the Magic score so little on offense and allow so few on defense, it is still a strong defensive team. Opponents are shooting just 44.4 percent from the field, good enough for 12th-best in the NBA, and the Magic are ninth in defensive efficiency. In all, six of Orlando’s 19 opponents have been held under 100 points and 12 of the 19 have been held below 105 points.

Evan Fournier had the best game of his career against Golden State, tying a career-high 32 points on 6-of-10 shooting from 3-point range. Terrence Ross added 19 points off the bench, while Jonathan Isaac and Markelle Fultz each scored 14 points in the win. Isaac added 11 rebounds and five blocked shots, while Fultz had nine rebounds. Khen Birch chipped in with seven points and 10 rebounds.

Washington was just embarrassed and will be motivated to make things right. The Wizards have not failed to cover the spread as a home underdog and Orlando hasn’t covered as an away favorite. All signs are pointing to the Wizards. Take the money line and look for Beal to have a big night at home to lead his team to the win.