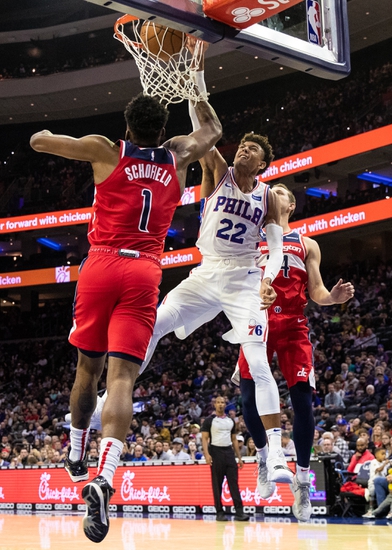 In the 76ers win over the Jazz, Philadelphia was led throughout the game by Ben Simmons.  Simmons scored 14 points, registering 8 rebounds, while dishing out 9 assists.  The 76ers shot 41% from the floor and 50% from distance.  Philadelphia got dominated in the paint, being out scored 60 to 36 in the game.  The 76ers led by as many as 26 points en route to the victory.

In the Wizards loss to the Magic, Washington was guided by Bradley Beal.  Beal did his part in trying to lead the Wizards to a win, scoring 42 points, pulling down 6 rebounds, and passing out 4 helpers.  The Wizards shot 51% from the floor and 34% from 3-point range.  The Wizards were out rebounded, 48 to 38.  Washington had an assist to turnover ratio in the game of, 22 to 10 in the loss.

Wizards are 1-5 ATS in their last 6 games overall.

Washington has been an easy team for opponents to score against, the Wizards rank 30th in points allowed per game, at nearly 123 per game.  The 76ers on the other hand have one of the better defense's, giving up just under 104 per game.  Beal and the Wizards have had no trouble scoring against team, averaging almost 119 per game, which ranks 3rd ins coring offense.  With the Wizards being able to put forth good offensive numbers against really anyone and seeing how the Wizards defense gives up points at will....I'm confident that both offense's will be able to score enough to push the total over.  Final score prediction, 76ers win and the total goes over, 124-116.