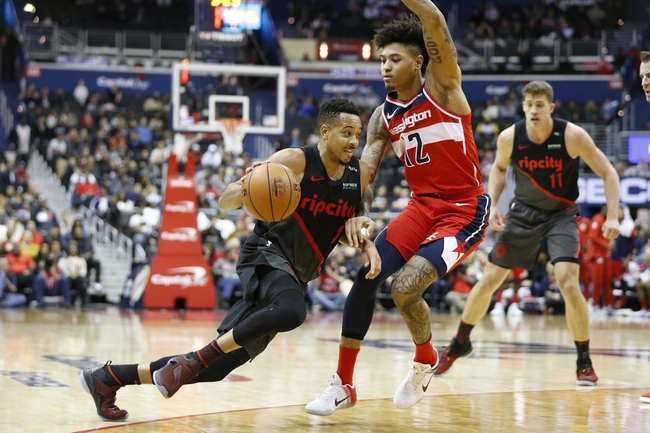 The Portland Trail Blazers head to Washington, D.C. on Friday for a game against the Wizards in a game between two teams at opposite ends of the country.  In their last game, the Trail Blazers were defeated by the New York Knicks by the score of 117-93. Carmelo Anthony led the way offensively for the Trail Blazers scoring 26 points while going 11 of 17 from the field and 1 of 2 from the free throw line. Hassan Whiteside led the Trail Blazers in rebounds in the game, pulling in 12 with 7 coming offensively.  Damian Lillard led Portland in assists, recording 8 while playing a total of 35 minutes in the game.

The Washington Wizards welcome the Portland Trail Blazers to town on Friday after losing their last game against the Orlando Magic by the score of 122-101.  Bradley Beal scored a team high 27 points while going 8 of 20 from the field and 9 of 10 from the free throw line.  Beal also led the Wizards in assists in the game against the Magic with 5 while playing a total of 30 minutes in the game.  Anzejs Pasecniks led Washington in rebounds with 10 and recorded 3 offensively.

The Portland Trail Blazers have scored 112 points per game this year while allowing 114.1 points per game.  The Washington Wizards have scored 116.2 points per game on the season while allowing 121 points per game.  In their last 5 games, the Trail Blazers are 0-5 and have lost 5 games in a row while the Wizards are 2-3.  The total has gone over in 4 of Washington's last 5 games when playing at home against Portland.  Washington is 1-6 against the spread in their last 7 games against an opponent in the Western Conference. Although the Trail Blazers aren’t playing well right now, this is the opportune time for them to get a win against a Wizards team that is missing some big pieces from their lineup.  Portland wins 115-108 and covers the spread.