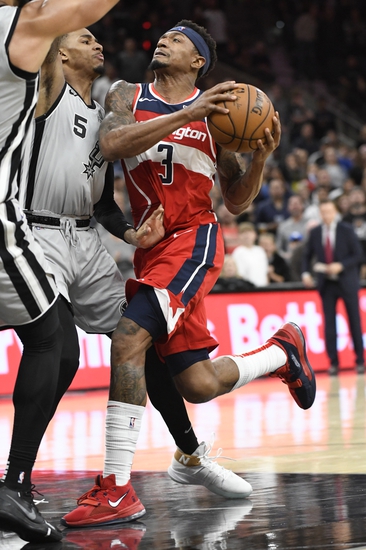 The San Antonio Spurs hit the road for a matchup with the Washington Wizards.  The Spurs enter this contest with a (5-9) record, having just lost to the Dallas Mavericks 117-110.  The Wizards are (3-8) thus far, after losing 125-121 to the Orlando Magic.

In the Spurs loss to the Mavericks, San Antonio was led offensively by DeMar DeRozan.  DeRozan made 14 of 20 field goals from the floor, while going a perfect 8 of 8 from the foul line, totaling 36 points. The Spurs shot just below 46% form the floor and 33% from 3-point range.  San Antonio won the rebounding battle, 54 to 49.  The Spurs had an assist to turnover ratio of 18 to 10.  Spurs biggest deficit was 18 points in the game.

In the Wizards loss to the Magic, Washington was guided by Bradley Beal.  Beal converted on 12 of 26 field goal attempts, while making 5 of his 6 free throw attempts, notching 34 points in the game.  The Wizards shot 47% from the floor and a nice 46% clip from distance.  Wizards had 31 assists compared to the Magic's 25.  Wizards really played from behind in the whole game, with their biggest lead being 2 points, but trailed by as many as 18 points.

Spurs are 1-5 ATS in their last 6 games overall.

Spurs are 1-4 ATS in their last 5 vs. Eastern Conference.

Wizards are 2-6 ATS in their last 8 home games.

The Spurs have been awful ATS this season, having gone 3-11 thus far.  The Wizards are 7-3-1 on the season ATS. The Wizards have had no trouble scoring, it has been the defense that has failed the Wizards so far.  Offensively Wizards are scoring 118 per game, but giving up 120 per contest.  The Spurs are giving up an average of 114 defensively.  With the amount of points the Wizards are able to score and give up, I like the over.  The over is also 4-2 for the Spurs on the road.  Final score prediction, Wizards win and the total goes over.