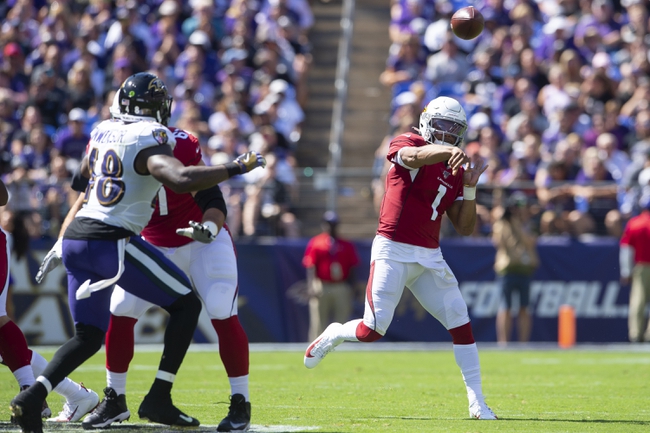 The Carolina Panthers and the Arizona Cardinals meet in a week 3 NFL matchup from State Farm Stadium on Sunday afternoon.

The Carolina Panthers will be on the hunt for their first win of the season after falling to 0-2 after a 20-14 loss to Tampa Bay in their last outing. Cam Newton has thrown for 572 yards and an interception on 56.2% passing this season while Christian McCaffrey leads the Panthers in rushing with 165 rushing yards and 2 touchdowns this season. DJ Moore leads Carolins with 16 receptions for 165 yards while Greg Olsen has 146 receiving yards and Curtis Samuel has 123 receiving yards this season. Defensively, Luke Kuechly leads Carolina with 25 tackles including 12 solo tackles while Shaq Thompson is 2nd with 17 total tackles this season. As a team, Carolina is averaging 347.5 yards of total offense and 20.5 points per game while allowing 319 yards of total defense and 25 points per game against this season.

The Arizona Cardinals will also be looking for their first win of the year after falling to 0-1-1 after a 23-17 loss to Baltimore in their last outing. Kyler Murray has thrown for 657 yards, 2 touchdowns and an interception on 57.4% passing while David Johnson leads Arizona in rushing with 96 rushing yards and a touchdown this season. Larry Fitzgerald leads Arizona’s receiving group with 13 catches for 217 yards and a touchdown while Christian Kirk has 10 grabs for 146 receiving yards this season. Defensively, Jordan Hicks leads Arizona with 25 total tackles, including 15 solo tackles while Budda Baker has 19 total tackles including 15 solo tackles of his own and Terrell Suggs has a pair of sacks this season. As a team, Arizona is averaging 368 yards of total offense and 22 points per game while allowing 458.5 yards of total defense and 25 points per game against this season.

Maybe a change of scenery will help the Panthers, as losing both of your first two games of the season when both games are at home to boot, is not a good look. The issue I have is that I don’t think Carolina should be favored in that spot against a Cardinals team that rallied to tie Detroit and just took a Baltimore team down to the wire that just routed the Miami Dolphins the week before and on the road in Baltimore no less. The Cardinals are young and inexperienced, but I’m just not high on the Panthers at all so I’ll take a chance on the home dog and back Arizona here.