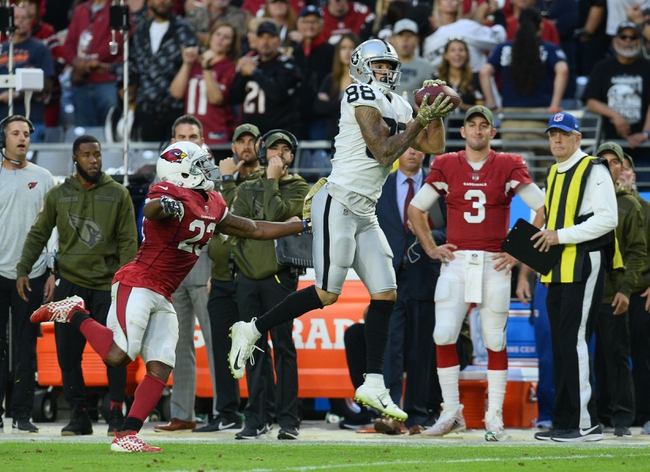 The Oakland Raiders are coming off a 14-3 victory over the Los Angeles Rams in their preseason opener. Mike Glennon and Nathan Peterman combined for 258 passing yards, one touchdown and two interceptions. Peterman led the Raiders with 56 yards on three carries, while Keon Hatcher had 45 receiving yards on two receptions. Defensively, Nevin Lawson led the Raiders with six tackles, Arden Key had one sack and Alex Barrett had one tackle for loss. The Oakland Raiders held the Rams offense to 3.7 yards per play and 3-14 on third down attempts. While it obviously wasn’t the Rams starters that made the Super Bowl last year, it was honestly one of the better defensive efforts of any team in opening week of the preseason. The Oakland Raiders have won four of their last five preseason games.

The Arizona Cardinals are coming off a 17-13 preseason victory over the Los Angeles Chargers. Brett Hundley and Kyler Murray combined for 148 passing yards and one touchdown. Wes Hills led the Cardinals with 37 yards and one touchdown on eight carries, while Trent Sherfield had 44 receiving yards and a touchdown on four receptions. Defensively, Dennis Gardeck led the Cardinals with seven tackles, Andre Branch had one sack and Deionte Thompson had one tackle for loss. The Arizona Cardinals have to be pleased with what they saw from their star rookie quarterback, as he controlled the offense for the most part and took care of the football. As the preseason drags out, I expect Murray to receive a much larger workload. The Arizona Cardinals have won four of their last five preseason games.

The Oakland Raiders have two backup QBs who haven't been good throughout their pro careers, so I need more convincing to get behind them. The Raiders also beat up on a Rams team that played almost none of its starters. The Arizona Cardinals will likely open things up a bit more for Murray with a game under his belt and his workload could expand as well. I'll take the playing rookie quarterback over anything the Oakland Raiders have to offer right now. Give me the chalk.