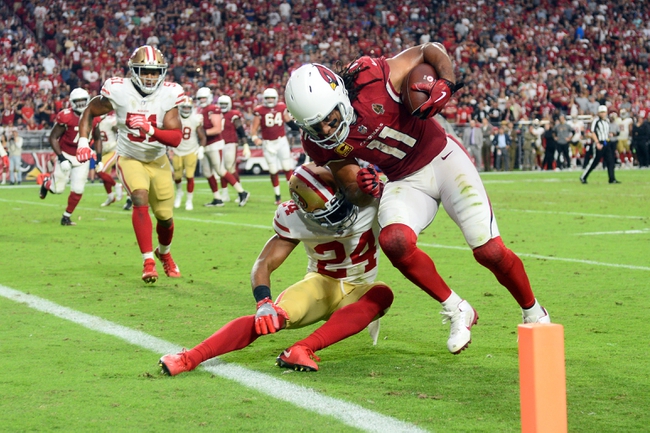 The San Francisco 49ers take their perfect record of (7-0) into Glendale, AZ for a Thursday night matchup with the Arizona Cardinals.  The Cardinals are (3-4-1) on the season.  The 49ers are coming off a win at home on Sunday.  The 49ers steamrolled the Panthers to a tune of 51-13.  The Cardinals saw their 3 game winning streak come to an end in New Orleans.  The Cardinals lost to the Saints 31-9.

The 49ers had a lot of offense in the win over Carolina, but were ultimately led by running back Tevin Coleman, who had one of the best productions for fantasy players.  Coleman had 105 yds rushing on 11 carries and 3 rushing touchdowns.  Coleman also added a receiving touchdown on 2 receptions.  Jimmy Garoppolo completed 18 of 22 passes for 175 yds, to go along with 2 touchdowns and 1 interception.  As a team, the 49ers rushed for 232 yds and 5 scores.  The 49ers picked off Carolina quarterback Kyle Allen 3 times in the victory.

The Cardinals led 3-0 after the first quarter over the Saints, but the Cardinals would go the whole game without finding the end zone.  Arizona quarterback Kyler Murray was 19/33 for 220 yds, with no interceptions.  The Cardinals only managed 40 yds rushing on 11 carries.  The Cardinals were hoping running back Chase Edmonds would be able to mirror his previous outing against the Giants.  That was not the case, Edmonds had 7 carries for 8 yds and is listed as doubtful against the 49ers.

The Cardinals are 5-2 ATS as the underdog.

The Cardinals are 2-2 ATS as the home team.

The over is 3-1 when the Cardinals are the home team.

The 49ers arguably have the best defense in football, ranking in the top 3 in a lot of categories.  The 49ers rank 2nd in fewest points allowed at 11 per game.  The 49ers also are giving up the fewest yds per game(224).  With Arizona running back Chase Edmonds listed as doubtful, it will be hard for the Cardinals to get drives going.  The Cardinals will have to turn to more of a passing attack offensively.  This plays right into the 49ers defensive ability, the 49ers rank 1st in pass defense.  The 49ers are giving up an average of 129 yds through the air.  With Arizona not having a valid running attack, the San Francisco defense will be able to key in on the pass.  Final score prediction, 49ers win and cover 30-13.