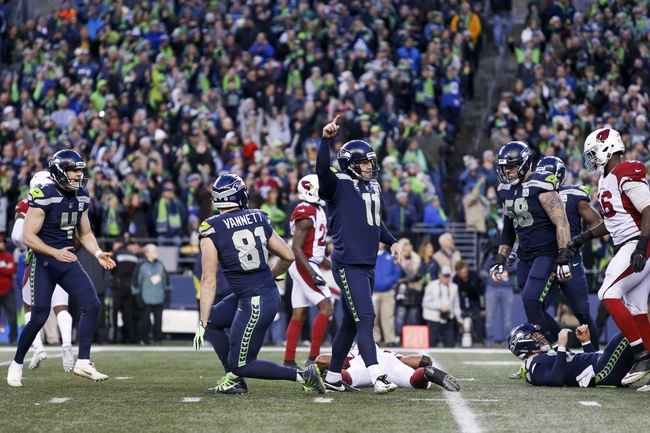 The Seattle Seahawks and the Arizona Cardinals meet in a week 4 NFC West division matchup in NFL action from State Farm Stadium on Sunday afternoon.

The Seattle Seahawks will look to bounce back after a 33-27 loss to New Orleans Saints last time out, falling to 2-1 on the year. Russell Wilson has thrown for 901 yards and 7 touchdowns on 71.4% passing while Chris Carson leads the Seahawks in rushing with 159 rushing yards and a touchdown. Tyler Lockett leads Seattle with 22 receptions for 277 yards and 2 touchdowns while DK Metcalf has 217 receiving yards and Will Dissly has 124 receiving yards and 3 touchdowns. Defensively, Bobby Wagner leads Seattle with 33 tackles including 15 solo tackles while Quinton Jefferson has a pair of sacks. As a team, Seattle is averaging 390.7 yards of total offense and 25.3 points per game while allowing 318.3 yards of total defense and 26.3 points per game against this season.

The Arizona Cardinals will still be looking for that elusive first win of the season after back-to-back losses dropped the Cards to 0-2-1 with a 38-20 loss to Carolina in their last outing. Kyler Murray leads Arizona with 830 passing yards with 4 touchdowns and 3 interceptions on 61.3% passing while David Johnson leads Arizona in rushing with 133 rushing yards and a touchdown. Larry Fitzgerald is Arizona’s top receiver with 253 receiving yards and 2 touchdowns while Christian Kirk has a team-high 20 catches for 205 yards this season. Defensively, Jordan Hicks leads Arizona with 35 total tackles, including a team-high 19 solo tackles while Haason Reddick has 26 total tackles and Budda Baker has 24 total tackles. Charndler Jones leads Arizona with 3 sacks while Terrell Suggs has 2 sacks this season. As a team, Arizona is averaging 328 yards of total offense and 21.3 points per game while allowing 443.3 yards of total defense and 29.3 points per game against this season.

I was tempted at first by points with Arizona at home, but then I remembered how bad the Cardinals are and how bad they’re expected to be this season. I mean the Cardinals made Kyle Allen look good in his first start for Carolina, throwing for 4 touchdowns. Seattle lost to New Orleans, but they rallied and almost completed the comeback and in reality, the Saints aren’t a bad team so there’s really nothing to criticize the Seahawks for there. I just think that Seattle has a lot more going for them than the Cardinals do here, so I’ll lay the points with Seattle in this one.