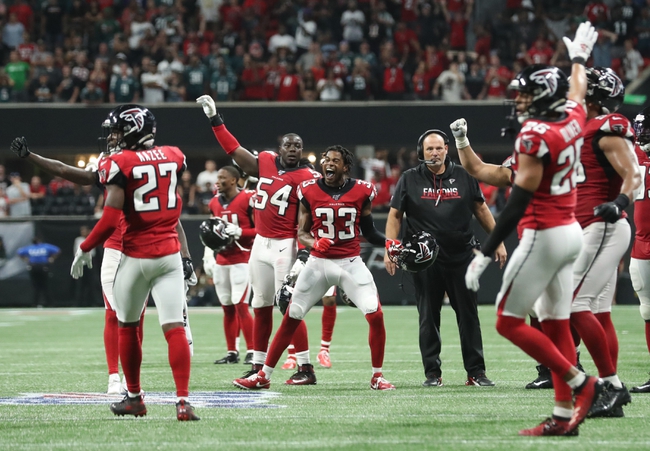 The Atlanta Falcons and the Indianapolis Colts meet in a week 3 inter-conference matchup in NFL action from Lucas Oil Stadium on Sunday afternoon.

The Atlanta Falcons will look to build on their first win of the season, evening their record up at 1-1 following a 24-20 win over Philadelphia on Sunday Night Football last week. Matt Ryan has thrown for 624 yards, 5 touchdowns and 5 interceptions on 67.4% passing while Ito Smith leads the Falcons on the ground with 63 rushing yards this season. Calvin Ridley leads Atlanta in receiving with 169 receiving yards along with a pair of touchdowns while Julio Jones has 137 receiving yards and 3 TDs and Austin Hooper has a team-high 13 grabs for 111 yards this season. Defensively, De’Vondre Campbell has a team-high 16 total tackles, including 12 solo tackles while Deion Jones has 11 total tackles and Grady Jarrett has a pair of sacks this season. As a team, Atlanta is averaging 356 yards of total offense and 18 points per game while allowing 277.5 yards of total defense and 24 points per game this season.

The Indianapolis Colts will also look to pick up some steam after their first win of the year, also coming in at 1-1 after a 19-17 win over Tennessee last time out. Jacoby Brissett has thrown for 336 yards, 5 touchdowns and an interception on 69.1% passing while Marlon Mack leads the Colts in rushing with 225 rushing yards and a touchdown this season. T.Y. Hilton leads Indy’s receiving corps with 12 catches for 130 yards and 3 touchdowns this season. Defensively, Darius Leonard leads Indianapolis with 18 total tackles including 10 solo tackles while Denico Autry leads the Colts with 2.5 sacks this season. As a team, Indianapolis is averaging 332 yards of total offense and 21.5 points per game while allowing 339 yards of total defense and 23.5 points per game this season.

I understand the allure of taking Indianapolis in what’s almost a pick ‘em scenario, especially with Brissett thriving after being pushed into the starting role in Indianapolis. However, I just feel like Atlanta is the better team here and the Falcons can key on guys like Mack and Hilton to shut down the Colts offensively. The Colts will be amped as this is their home opener after two tough road games to start the year, but Atlanta proved themselves in a tough test against Philadelphia last time out, and I think the Falcons get the job done on the road here in a tight one so I’ll take the free point with Atlanta here.