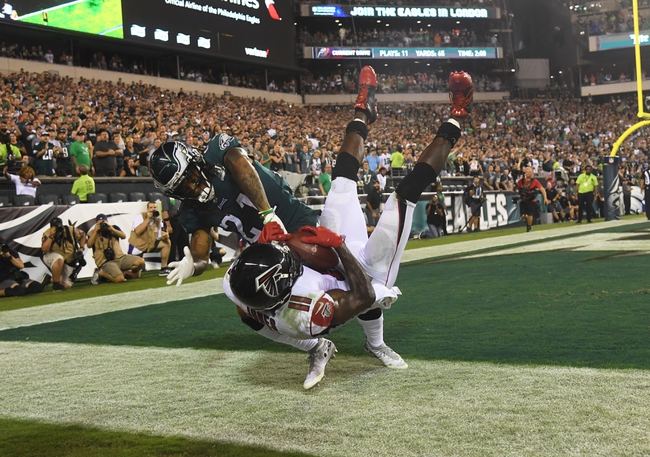 The Atlanta Falcons need a bounce back performance after getting rocked by the Minnesota Vikings. The Atlanta Falcons have split their last eight home games. Matt Ryan is completing 71.7 percent of his passes for 304 yards, two touchdowns and two interceptions. Ryan has two or more touchdown passes in seven of his last 10 games. Austin Hooper and Calvin Ridley have combined for 141 receiving yards and one touchdown while Mohamed Sanu has five receptions. The Atlanta Falcons ground game is averaging 73 yards per contest, and Ito Smith leads the way with 31 yards on six carries. Defensively, Atlanta is allowing 28 points and 269 yards per game. Tyeler Davison leads the Atlanta Falcons with eight tackles, Grady Jarrett has one sack and Takkarist McKinley has one tackle for loss.

The Philadelphia Eagles have split their last 12 games ATS as a road favorite. The Atlanta Falcons have covered seven of their last eight games as a home underdog and have won outright five of those last six games. I understand the Falcons have some injuries along their offensive line, as Chris Lindstrom broke his foot and Matt Gono is questionable with a back injury, but this line still doesn't make sense. The Falcons are a very good football team on both sides of the ball and will play much better at home than they did last week on the road. The Philadelphia Eagles nearly lost as double-digit favorites to the Redskins, and they seem to play down to their competition far more than people talk about. There's very few teams that should be favored over the Falcons at home in a primetime spot, and I don't think the Eagles are one of those teams. Give me the Falcons and the ML. You can keep the point.