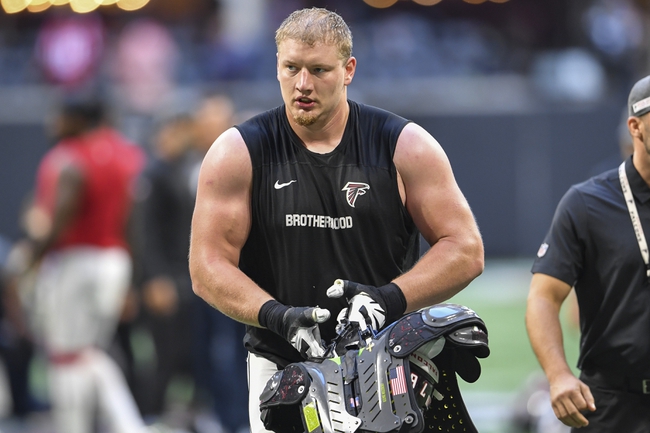 The Seattle Seahawks (5-2) head across the country on Sunday, for a battle with NFC foe, the Atlanta Falcons.  In Seattle’s last game, they were stifled all day by a very talented Baltimore Ravens defense.  Russell Wilson had one of his worst games in terms of accuracy in recent memory, completing just 20 passes on 41 attempts, while throwing for 241 yards, a touchdown and an interception.  Wilson’s touchdown was caught by wide receiver, Tyler Lockett who also recorded 5 catches and 61 yards on the day.  The Seattle running game was also not able to breakthrough, with lead rusher Chris Carson running the ball 21 times for just 65 total yards.

Despite the Seahawks offense struggling last week, Russell Wilson is putting up extremely productive numbers.  On the year Wilson has thrown for 1,945 yards for 15 touchdowns and just 1 interception.  Running back Chris Carson is also having a good season, rushing for a total of 569 but has only found the end zone twice running the ball.  Wilson’s favorite target on the year has been wide out Tyler Lockett who has 40 catches for 515 yards and 4 touchdowns.  Seattle heads into their game scoring 25.9 points per game and allowing 25.1 points per game.  Players on the injury list include offensive tackle Duane Brown, defensive end Ziggy Ansah, safety Bradley McDougald who are all listed as questionable and safety Lano Hill who is listed as doubtful.

The Atlanta Falcons (1-6) enter Sunday’s game against the Seahawks on a 5 game losing streak and will look to right the ship after being clobbered by the Rams 37-10 last Sunday.  In their game against the Rams, the Falcons defense struggled.  Although the Falcons held Todd Gurley II to just 41 yards on 18 carries, Rams quarterback Jared Goff tore apart the Falcon defense, completing 22 of 37 passes for 268 yards and 2 touchdowns. Running back Devonta Free rushed 7 times for 19 yards before being ejected for throwing a punch at Rams defenseman Aaron Donald after play early in the game.  Matt Ryan completed 16 of 27 passes for 159 yards while throwing an interception.

The Falcons continue their downward spiral this season and it doesn’t look like things are going to get much better.  On the year, Matt Ryan, who is listed as questionable for Sunday’s game has thrown for 2,170 yards while totaling 15 touchdowns and 8 interceptions.  Ryan’s success once again helped the ever so consistent Julio Jones record 40 receptions for 560 yards and 4 touchdowns.  Davonta Freeman who is currently listed as active for Sunday’s game despite being ejected against the Rams, has had another down season, carrying the ball 84 times for 294 yards without scoring a touchdown on the ground.  The Falcons offense has averaged 20.7 points per game on the year, while the defense has given up 31.9 yards per game.  Other notable injuries for the Falcons include cornerback Desmond Trufant who is listed as questionable, while back up running back Ito Smith is out.

My Pick - It seems even more apparent after the Falcons traded Mohammed Sanu to New England on Tuesday that the organization knows they are heading into a rebuilding phase and it’s only safe to wonder how much longer head coach Dan Quinn will be around.  Atlanta has not covered a line in their last 5 games and it would be hard to imagine them keeping this one close.  Meanwhile Seattle has covered in 3 of the 7 line so far this season. Final score prediction, Seattle Seahawks wins on the under 35-10.