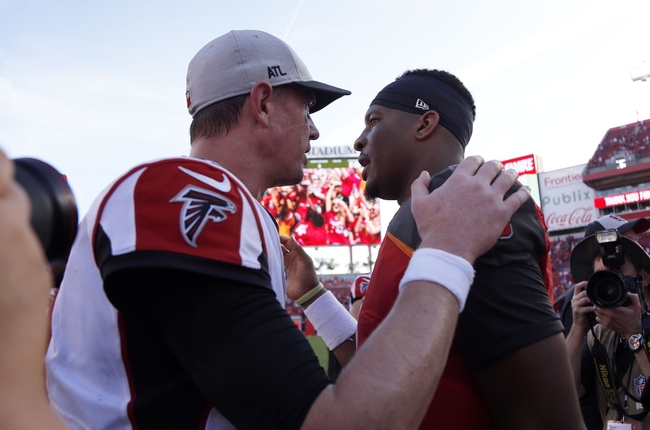 The Tampa Bay Buccaneers are on the road for a matchup with the Atlanta Falcons.  The Buccaneers are (3-7) thus far, coming off a 34-17 loss to the Saints.  The Falcons are also (3-7), after their 29-3 win over the Panthers.

The Buccaneers fell behind early and could not catch up.  The Buccaneers trailed 20-0 with under 3 minute till the half. With 2:42 till halftime, Peyton Barber found the end zone for the Buccaneers first points of the game.  Jameis Winston completed 30 of 51 attempts for 313 yds, while throwing 2 touchdowns and 4 interceptions. Tampa Bay did out gain New Orleans on the day, 334 to 328.  The Buccaneers were held to just 36 yds rushing.

The Falcons have now won 2 games in a row after their 1-7 start.  The Falcons were led by quarterback Matt Ryan in the win.  Ryan was 21 of 31 for 311 yds and a touchdown.  Ryan found Calvin Ridley a lot throughout the game.  Ridley had 143 yds receiving on 8 receptions and a score.  Atlanta kicker Younghoe Koo made 3 field goals on the day.  The Falcons picked off Panthers quarterback Kyle Allen 4 times, en route to the victory.

Buccaneers are 0-6 ATS in their last 6 games overall.

Buccaneers are 3-7-1 ATS vs a team with a losing record.

The over is 8-0 in Buccaneers last 8 games overall.

Falcons are 2-9 ATS vs a team with a losing record.

The under is 4-0 in Falcons last 4 games overall.

The home team is a perfect 4-0 ATS in the last 4 matchups between the two teams.  It is hard to ignore what the Falcons have done in their last two games, outscoring the Saints and Panthers by a total of 55 to 12. Tampa Bay has not has as much success lately, losing 5 of their last 6 games.  The Atlanta defense is allowing 5 less points per game and with the way the Falcons offense looks right now, I'll side with the falcons at home.  Final score prediction, Falcons cover, 31-21.