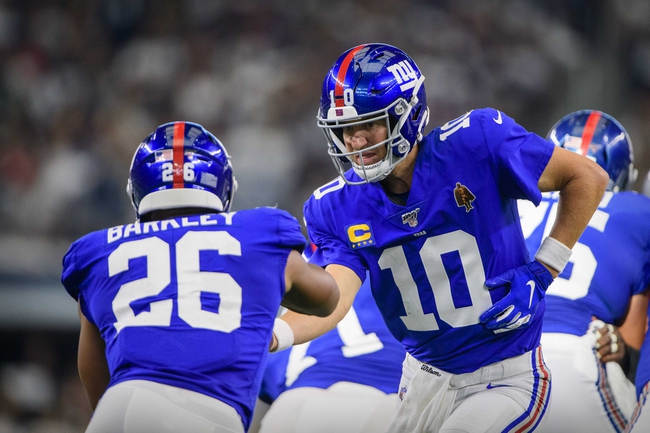 The Buffalo Bills look for another victory after escaping with an opening win over the New York Jets. The Buffalo Bills have lost five of their last seven road games. Josh Allen is completing 64.9 percent of his passes for 254 yards, one touchdown and two interceptions. Allen has one or less touchdown passes in 10 of his last 12 games. John Brown and Cole Beasley have combined for 163 receiving yards and one touchdown while Tommy Sweeney has two receptions. The Buffalo Bills ground game is averaging 128 yards per contest, and Devin Singletary leads the way with 70 yards on four carries. Defensively, Buffalo is allowing 16 points and 223 yards per game. Matt Milano leads the Buffalo Bills with nine tackles, Jerry Hughes has 1.5 sacks and Levi Wallace has two pass deflections.

The New York Giants need a win after getting waxed by the Dallas Cowboys in their opener. The New York Giants have lost six of their last eight home games. Eli Manning is completing 68.2 percent of his passes for 306 yards, one touchdowns and zero interceptions. Manning has one or less touchdown passes in five of his last seven games. Evan Engram and Cody Latimer have combined for 180 receiving yards and one touchdown while Sterling Shepard has six receptions. The New York Giants ground game is averaging 151 yards per contest, and Saquon Barkley leads the way with 120 yards on 11 carries. Defensively, New York is allowing 35 points and 494 yards per game. Antoine Bethea leads the New York Giants with seven tackles, Ryan Connelly has one tackle for loss and Alec Ogletree has one pass deflection.

The Buffalo Bills have failed to cover five of their last seven games as a road favorite. The New York Giants have failed to cover five of their last six games as a home underdog. I'm not sold on the Bills roster, mainly due to Allen being the quarterback, and I certainly don't trust them on the road. The Giants were expected to lose to the Cowboys, so their stock doesn't change much, but this is still a team with somewhat expectations in terms of being competitive. I actually think we're getting the better team and free points here. I'm leaning toward the Giants in a game they should win outright if they're going to make anything of this season.