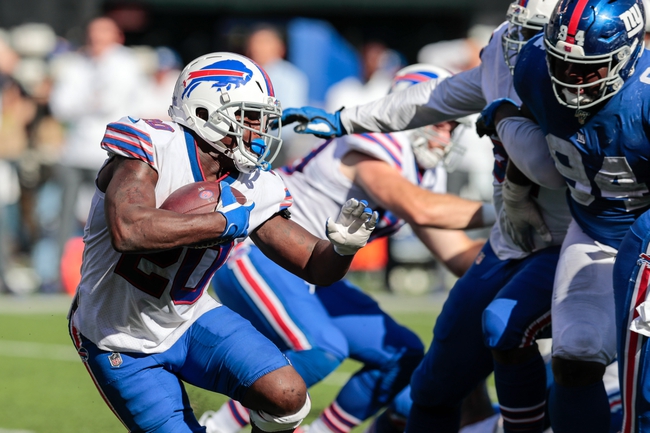 The Cincinnati Bengals and the Buffalo Bills meet in a week 3 NFL matchup from New Era Field on Sunday afternoon.

The Cincinnati Bengals will be looking for their first win of the season after falling to 0-2 with a 41-17 loss at the hands of San Francisco in their last outing. Andy Dalton has thrown for 729 yards on 65.6% passing with 4 touchdowns and an interception this season while Joe Mixon and Giovani Bernard are tied for the team-high with 27 rushing yards through the first two games of the season this year. John Ross III leads Cincinnati in receiving with 270 receiving yards and 3 touchdowns while Tyler Boyd has 182 receiving yards with a team-high 18 receptions on 21 targets. Defensively, Preston Brown leads the Bengals with 18 total tackles while Sam Hubbard has 16 tackles and a pair of sacks this season. As a team, Cincinnati is averaging 372.5 yards of total offense and 18.5 points per game while allowing 402 yards of total defense and 31 points per game against this season.

The Buffalo Bills will look to maintain their perfect record after improving to 2-0 with a sweep at MetLife Stadium in the first two games of the year, taking down the Giants by a final score of 28-14 last time out. Josh Allen has thrown for 507 yards, 2 touchdowns and 2 interceptions on 64.2% passing while Devin Singletary leads Buffalo’s ground attack with 127 rushing yards. John Brown leads Buffalo’s receiving corps with 14 catches for 195 yards while Cole Beasley has 123 receiving yards this season. Defensively, Matt Milano and Tremaine Edmunds are tied for the team lead with 16 tackles while Levi Wallace has a team-high 12 solo tackles this season. As a team, Buffalo is averaging 379 yards of total offense and 22.5 points per game while allowing 296.5 yards of total defense and 15 points per game against this season.

I was really high on Cincinnati last week after a gutsy performance on the road against Seattle in week 1, and the Bengals repay me by putting up a complete and utter stinker at home against the 49ers. Buffalo didn’t have the toughest first two games in the world, but they did rally to beat the Jets in the opener and controlled the Giants in week 2. This could be a look-ahead spot for Buffalo with New England on deck in week 4, but I think the Bills have enough to win this one by at least a touchdown, so I’ll lay the points with Buffalo in this spot.