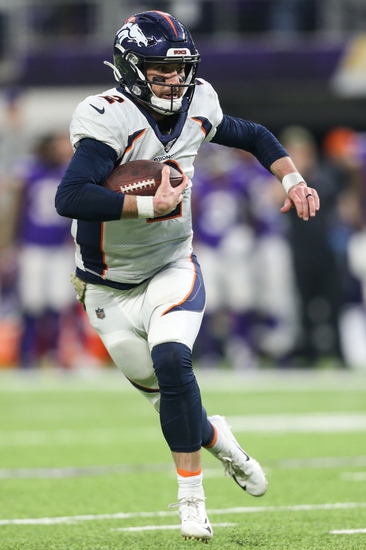 While Denver (3-7) has not officially been eliminated from the playoffs, plenty would have to go the Broncos’ way for them to win out and earn a wild card spot. However, the game has massive playoff implications for the Bills (7-3) when they host the Broncos to New Era Field in Buffalo. The Bills might be trailing a suddenly struggling New England team by just two games, and they may be leading the wild card race by one game in the AFC, but with one of the toughest schedules remaining, every win will be key if Buffalo wants to reach the postseason.

Buffalo has been one of the biggest surprises in the NFL jumping out to an impressive 7-3 record, but after this game against Denver, Buffalo has four incredibly difficult tests before finishing the year with the Jets. After the Broncos game, Buffalo’s remaining five opponents have a combined record of 31-19, and the next four opponents combine for a 28-12 record. Worst of all, three of those four games are on the road. Buffalo will be at Dallas on Thanksgiving night, followed by a home game against the red-hot Baltimore Ravens before two road games at Pittsburgh and New England. The Bills’ season ends with a home game against the Jets. Clearly, nothing is guaranteed here on out and each win will be key starting with this one against the Broncos.

Despite Denver’s poor record, it has been competitive in most games this year. The Broncos suffered a heart-breaking 27-23 loss to Minnesota last week after leading the Vikings 20-0 at the half, and they defeated Cleveland the week before. Denver also only has two losses of more than 10 points (against Green Bay and Kansas City). Quarterback Brandon Allen and receiver Courtland Sutton had a great connection in the loss to Minnesota, with Sutton catching five balls for 113 yards and Allen passed for 240 yards and a touchdown with one interception. Despite the loss, Denver still out-gained Minnesota, 394-321, and out-rushed the Vikings 124-37.

After a 5-1 start -- wins against the Jets, Giants, Bengals, Titans, and Dolphins, Buffalo is just 2-2 in its last four games and the wins continued to come against unimpressive opponents in Washington and another against Miami. The combined record of the teams that Buffalo has defeated this season is just 15-55. However, the Bills have been consistently better than the bottom-dwellers of the NFL, which has to count for something. In its 37-20 win over Miami last week, Josh Allen completed 21-of-33 passes for 256 yards and three touchdowns without an interception. John Brown was huge with nine receptions for 137 yards and two touchdowns, while Devin Singletary rushed the ball 15 times for 75 yards.

This is a game for Buffalo against a team with a losing record, so the Bills should win, right? That’s how it has gone so far this year. But Denver has been pretty good on the road this season, especially since the beginning of October. The Broncos beat the Chargers on the road, lost to the Colts by two away from home, and nearly knocked off Minnesota at the Vikings last week. In addition, while Buffalo is 6-3-1 against the spread this year, the Bills are only 1-3 as a home favorite, while Denver is 3-1 against the spread as a road ‘dog. Buffalo may win, but take Denver plus the points in this one.