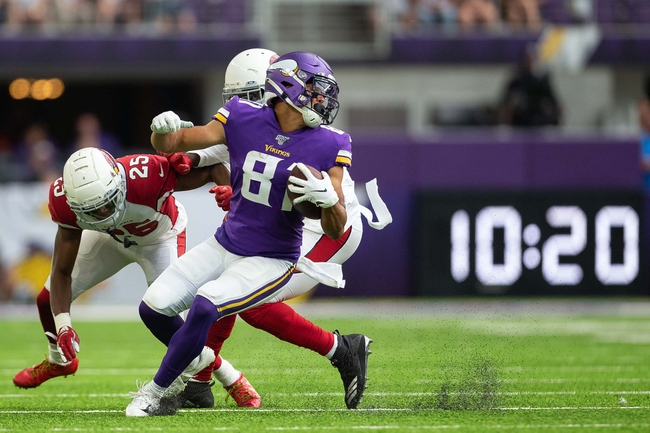 The Minnesota Vikings and the Buffalo Bills square off to close out their preseason schedules in week 4 NFL preseason action from New Era Field on Thursday.

The Minnesota Vikings will look to finish the preseason with a perfect record after improving to 3-0 on the preseason after a 20-9 win over Arizona last time out. Kyle Sloter has thrown for 102 yards and a touchdown on 6 of 7 passing while Kirk Cousins went just 3 of 13 for 35 yards. Dalvin Cook led Minnesota with 88 rushing yards, including an 85-yard rushing TD. Mike Boone added 41 rushing yards and a TD of his own while De’Angelo Henderson had 38 rushing yards. Olabisi Johnson led the Vikings’ receiving group with 3 grabs for 52 yards while Khari Blasingame had a touchdown grab for Minnesota. Defensively, Devante Downs had a sack while Anthony Barr led the Vikings defense with 5 tackles in the victory.

The Buffalo Bills will also be looking to finish the preseason unbeaten after a 24-20 win over Detroit in their last outing. Matt Barkley threw for 142 yards and a touchdown on 12 of 14 passing while Josh Allen recorded 49 passing yards on 3 of 8 passing. Frank Gore led the Bills on the ground with 57 rushing yards while LeSean McCoy had 37 rushing yards. Devin Singletary and Isaiah McKenzie each had a rushing score while Duke Williams added a receiving TD for the Bills. T.J. Yeldon led the Bills with 3 grabs for 51 receiving yards while Zay Jones had 3 grabs of his own for 46 yards. Defensively, Shaq Lawson and Deon Lacey each had a sack while Jaquan Johnson forced a fumble that he also recovered and Tremaine Edwards led the Bills with 5 tackles.

I think Buffalo being favored at home in the preseason makes sense, but this is the week where the starters will probably see the most playing time and I just think that Minnesota has more overall depth than the Bills do. The Vikings have also played the tougher preseason slate up to this point in my opinion, and getting points with the better team even if they’re slightly better is never a bad bet and is a good way to increase your bankroll. I’ll take the points with Minnesota in a game I see the Vikings winning outright to finish the preseason unbeaten.