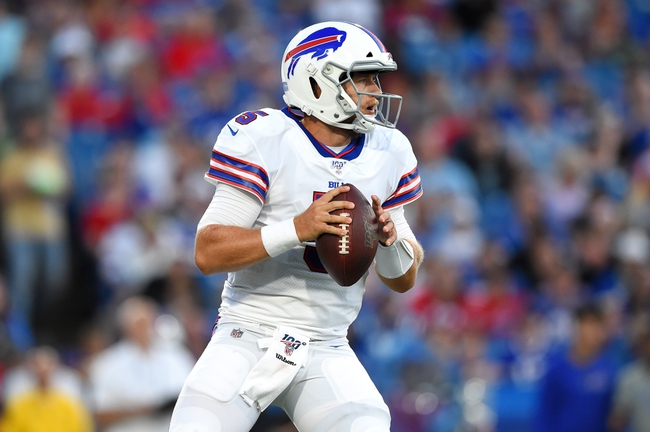 The Buffalo Bills and the Carolina Panthers will match up on the NFL circuit for Week 2 preseason action Friday.

Buffalo failed to return to the playoffs in 2018, finishing 6-10 and third place in the AFC East. The Bills roster underwent some major changes due to trades and cuts last year, so we should see a completely different squad in 2019.

In the Bills’ first preseason activity this year, they managed a 24-16 home win over the Indianapolis colts. Matt Barkley had a solid line for Buffalo in that one with a 9-of-14 outing, 126 yards and a TD. Christian Wade also rattled off a 65-yard TD run for the Bills there.

Over on the Carolina side, they didn’t make the playoffs in 2018 either. The Panthers would ultimately finish at 7-9 and in third place in the NFC South. After a hot 6-2 start, Carolina hit a seven-game losing streak that pretty much wrapped things up.

Carolina’s first preseason game was a win on the road against the Chicago Bears 23-13. QB Will Grier led the way with 77 yards, a TD and a pick, while Elijah Holyfield put up nine rushes for 26 yards and a score.

Buffalo seems to have a good young core of players and they’ve made some steps in the right direction but probably still aren’t near being able to take on the Patriots in the division—let alone the Dolphins and Jets.

As for Carolina, their major question mark will be QB Cam Newton’s arm (he had arthroscopic surgery on his shoulder in the offseason). If it takes Newton a while to get back in the groove it could be another long season.

That said, Carolina probably has a deeper set of talent than Buffalo does, so I’m going with the Panthers here.