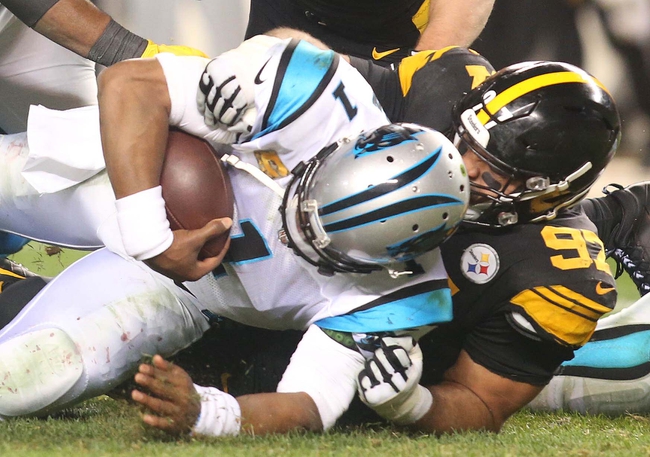 The Pittsburgh Steelers are 3-0 in preseason play after a 18-6 win over the Tennessee Titans. Joshua Dobbs and Mason Rudolph combined for 154 passing yards, one touchdown and two interceptions. James Conner led the Steelers with 41 yards on five carries, while James Washington had 41 receiving yards and one touchdown on one reception. Defensively, Robert Spillane led the Steelers with five tackles, Cameron Heyward had one sack and Tuzar Skipper had one tackle for loss. The Pittsburgh Steelers have allowed a combined 13 points in their last two games and haven’t allowed a touchdown in their last two quarters. The Steelers are flying all over the field and you have to be impressed with their effort up to this point. The Pittsburgh Steelers have won each of their last five preseason games.

The Carolina Panthers are 1-2 in preseason action after a 3-10 loss to the New England Patriots. Will Grier and Cam Newton combined for 74 passing yards, zero touchdowns and zero interceptions. Jordan Scarlett led the Panthers with 24 yards on 10 carries, while Reggie Bonnafon had 31 receiving yards on two receptions. Defensively, Antwione Williams led the Panthers with eight tackles, Brian Burns had two sacks and Woodrow Hamilton IV had one tackle for loss. The Carolina Panthers are coming off a game where they had just three points, seven first downs and averaged 2.4 yards per play. To make matters worse, Cam Newton suffered a foot sprain and there’s a chance he could miss the first game of the regular season. The Panthers aren’t in the best of shape with meaningful games right around the corner. The Carolina Panthers have split their last six preseason games.

The Pittsburgh Steelers are the better team here, even with the backups playing the whole thing. Dobbs and Rudolph have both provided a spark in the later quarters and the Steelers have a deep defense that's tough to move the ball on. The Carolina Panthers have been blah for much of the preseason. However, we're getting a free field goal with the home team, something you don't see often. In fact, the Panthers are the only home team this week that's getting points. I'll take a shot with the points simply based on the value.