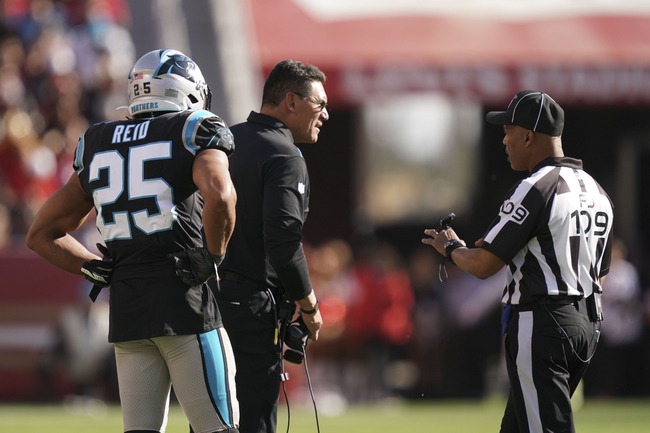 The Tennessee Titans head to Carolina this Sunday for a match up with the Panthers after winning their last 2 games and going 2-0 with quarterback Ryan Tannehill under center.  In their last game the Titans defeated the Tampa Bay Buccaneers 27-23 at home. Tannehill was 21 of 33 passing for 193 yards and 3 touchdowns. Running back Derrick Henry was shut down most of the day against a tough Tampa Bay defense but was able to carry the ball 16 times for 75 yards. Tannehill threw touchdown passes to Jonnu Smith, Tajae Sharpe and A.J. Brown. The most productive receiver on the day was tight end Jonnu Smith who caught 6 passes for 78 yards to go along with his touchdown. The Titans defense was tough on Buccaneers quarterback Jameis Winston all day, although he threw for 301 yards he also threw 2 interceptions and fumbled 3 times losing 2 of them.

The Titans are now 4-4 on the season and it appears that they have found their quarterback for at least the rest of this season and Ryan Tannehill , who has now thrown for 649 yards, 5 touchdowns and 2 interceptions on the season and is currently giving the Titans offense the spark that it was missing under Marcus Mariota. Derrick Henry has been the Titans lead rusher on the season as he has carried the ball 151 times for 581 yards and 5 touchdowns. A.J. Brown has been the most productive Titans wide receiver catching 22 passes for 348 yards and 3 touchdowns on the season.  The Titans defense been good all season allowing opponents to just 16.9 points per game. While the Titans defense is giving up 257.3 pass yards per game they have been dominant against the run allowing just 96.5 rushing yards per game but will have their hands full this weekend with Panthers running back Christian McCaffrey.

The Carolina Panthers welcome the Tennessee Titans to their home field on Sunday after a blowout loss to the San Francisco 49ers by the score of 51-13 Last Sunday.  Panthers quarterback Kyle Allen was stifled most of the day by a tough 49ers defense and completed just 19 of 37 passes for 158 yards without throwing a touchdown but throwing 3 interceptions. Running back Christian McCaffrey had a decent day carrying the football 14 times for 117 yards and 1 touchdown. With the ineffectiveness of Kyle Allen against the 49ers defense the wide receiving coure struggled, the lead receiver for the Panthers on the day was Curtis Samuel who caught 4 passes for just 46 yards.  The Panthers defense didn't have the best day against the 49ers offense allowing 388 yards with 232 of them coming on the ground.

The Panthers are now 4-3 on the season in what can be seen as somewhat of a surprise after playing most of this season without star quarterback Cam Newton. In Newton's absence, Kyle Alan has thrown for 1,059 yards, 7 touchdowns and 3 interceptions, which all 3 were all thrown last Sunday against San Francisco. Christian McCaffrey is having another productive season and has rushed 141 times for 735 yards and 8 touchdowns. The dual threat McCaffrey has also caught 39 passes and scored 2 touchdowns through the air this season. The most productive wide receiver for the Panthers on the season has been D.J. Moore who has 38 catches for 463 yards and 1 touchdown.  The Panthers defense has played decent this season allowing 26.3 points per game and 374.6 yards per game but will need a better effort on Sunday against the Titans than the one they had against San Francisco last Sunday. With Cam Newton out once again it will be up to Kyle Allen to lead the Panthers to a win against a very tough Titans defense.

In what will be an interesting match up I believe the Carolina Panthers will come out with a victory in this game. With the Panthers looking to have a bounce back game in front of their home crowd this weeks game really comes down to the play of the defenses. The Titans come into the game as a hot team under quarterback Ryan Tannehill but I believe that the Panthers have a good enough defense to shut him down as well as holding down the Titans running game. This will be a close game but the Panthers are simply a better overall team. Carolina wins 24-17 and covers the spread.