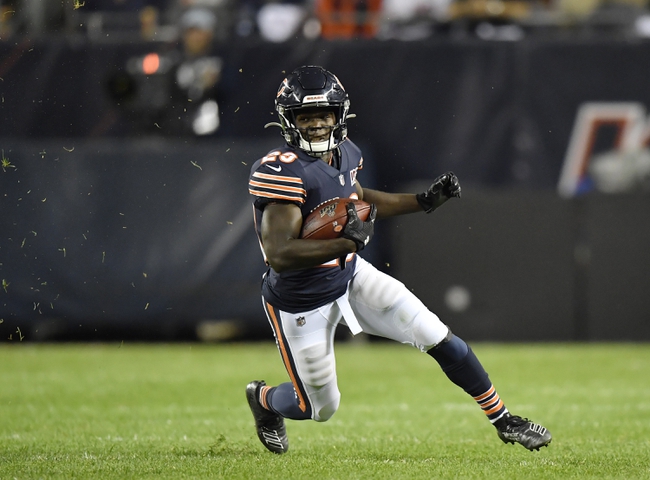 The Chicago Bears and the Denver Broncos meet in a week 2 inter-conference matchup in NFL action from Empower Stadium at Mile High on Sunday afternoon.

The Chicago Bears come into this one rested after having a couple extra days to stew on their 10-3 loss to Green Bay to open the regular season. Mitch Trubisky threw for 228 yards and an interception on 26 of 45 passing while the Bears combined for just 46 rushing yards on 15 carries as a team in the loss. Allen Robinson II had 7 receptions for a team-high 102 yards while Tarik Cohen had a team-high 8 receptions for 49 yards. Defensively, Leonard Floyd had 2 of Chicago’s 5 sacks while Khalil Mack forced a fumble and Kyle Fuller had a team-high 6 solo tackles in the losing effort.

The Denver Broncos will also look to rebound after a 24-16 setback in their season opener at the Oakland Raiders in their last outing. Joe Flacco threw for 268 yards and a touchdown on 21 of 31 passing while Royce Freeman led the Broncos with 56 rushing yards and a touchdown and Phillip Lindsay added 43 rushing yards. Courtland Sutton led the Broncos in receiving with 7 receptions for 120 yards while Emmanuel Sanders had 5 receptions for 86 yards and a touchdown. Defensively, Isaac Yiadom had a team-high 8 solo tackles while Josey Jewell had 7 solo tackles and 7 assisted tackles in the loss as the Brocnos gave up 357 yards of total offense in the losing effort.

The points with Denver are somewhat tempting as the thin air at Mile High can be an X-factor, as well as the fact that Chicago’s lost their last four road openers. However, Denver struggled and eventually lost to a Raiders team that has been one of the worst teams in the NFL defensively for a couple of years now, and Chicago has also had extra rest while Denver is playing on a short week. I don’t really have much faith in Trubisky as a starter despite what he did last season, but the Bears are probably the team that’s easier to trust for a bounce back, even on the road, so I’ll lay the points with Chicago in this spot.