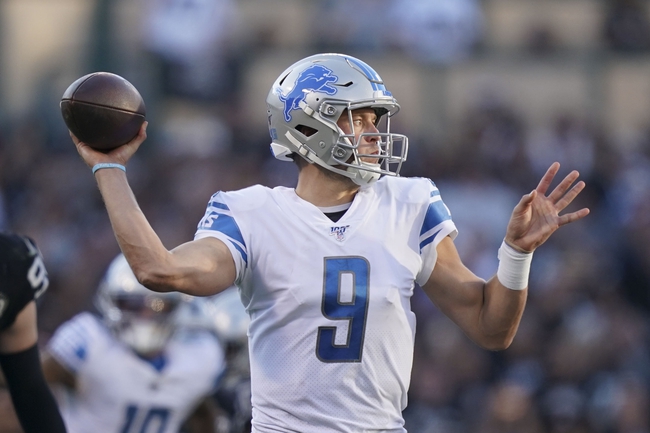 Two teams hoping to salvage their season play head-to-head at Soldier Field on Sunday when the Detroit Lions (3-4-1) visit the Chicago Bears (3-5) in NFC North action. Neither team has played well as of late with the Bears losing four in a row and the Lions dropping four of their last five, but the winner will have something positive to take into the second half of the season.

Detroit started off the season in impressive fashion, earning a tie on the road at Arizona, then returning home to knock off the Chargers. The season continued to look positive for the Lions when they beat Philadelphia on the road the following week to jump to 2-0-1 and Detroit looked like a team ready to compete for the NFC North title. But the defense that allowed just 10 points to the Chargers suddenly allowed 34 in a loss to Kansas City, 23 in a loss at Green Bay, and 42 in a loss at home to Minnesota and the Lions’ season was suddenly in a tailspin. Detroit has split the last two weeks with a 31-26 win over the Giants and a 31-24 loss to Oakland, but the defense continues to allow big numbers, hurting the team’s chances at winning.

In contrast, the Lions are one of the more prolific offenses in the league, ranking fifth in the NFL in yards per game (391.3) and third in passing yards per game (295.3), but just 12th in scoring at 25.5 points per game. That total is still good, but not enough to make up for the poor defense. The offense is led as it has been for years by quarterback Matthew Stafford. The veteran leads the NFL with 312.4 yards passing per game and is second in touchdowns with 19.

It sets up an interesting matchup with the Bears considering that they only rank better than two teams in the NFL in yards. In fact, Stafford has passed for almost 400 more yards than the Bears have gained as a team this year. Chicago is also averaging just 17.8 points per game, also among the worst in the NFL. That offense is led by quarterback Mitch Trubisky, who has passed for 1,217 yards and just five touchdowns. David Montgomery has been the leader out of the backfield, rushing for 50.8 yards per game and five touchdowns.

So while the matchup of Detroit’s weak defense and Chicago’s offensive woes should be interesting, the same should take place when the Lions’ strong offense takes the field. The reason for that is Chicago’s defense ranks sixth in the NFL in yards allowed (2,589) and fifth in points allowed at 144, or 18.0 per game.

How to figure this game out seems about as easy as flipping a coin in the air and hoping for the best. Both teams are strong on one side of the ball and incredibly weak on the other. Which side will win out? Taking a look at past performances should give a clearer view. The best defense the Lions have faces so far is Minnesota, which is No. 4 in points allowed per game (two spots better than Chicago). Detroit scored 30 against the Vikings, which is the most they have allowed all season long. In contrast, the Bears haven’t faced a team that ranks in the top 10 in the NFL in points per game.

It’s tough to get behind a Chicago team that can’t score and has allowed an average of nearly 26 points per game in its last three home games against teams that aren’t known as elite offensive teams in the NFL. And the Lions are getting points here? Consider the money line, but enjoy Detroit plus more than a field goal here.