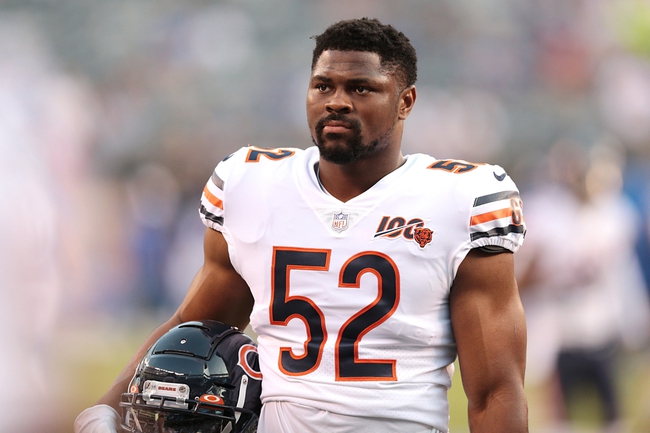 The Green Bay Packers haven’t missed the playoffs three straight seasons since 1990-92, and they enter this year with Matt LaFleur as head coach. The Green Bay Packers have lost seven of their last eight road games. The Green Bay Packers have won each of their last four regular season openers. The Packers will continue to live and die off the play of quarterback Aaron Rodgers, who has masked many weaknesses on this team in the past and has topped 4,000 passing yards in five of the last eight years. The concern I have for this game is Rodgers didn’t play in the preseason, so he had no chance to gain a rhythm in a game setting. The offense could use a more reliable running game and the WR depth is thin, but the Packers offense and team overall always has hope with a healthy No. 12 under center. The Packers defense should be much improved with the additions of Za'Darius Smith and Adrian Amos, a side of the ball that’s needed it given that Green Bay has finished outside of the top-20 in defensive points allowed each of the last three years. The last time the Packers were top-10 in scoring defense, (2010) they ended up winning the Super Bowl. Give Rodgers some help and the Packers are a dark horse to do something special once again.

The Chicago Bears are coming off their first double-digit winning season since 2012 and enter their second year under coach Matt Nagy. The Chicago Bears have won their last five home games. The Chicago Bears haven’t won a regular season opener since the 2013 season. The Bears had arguably the best defense in the league last season and return eight of their top-nine tacklers, including one of the best defenders in Khalil Mack, and a duo of Eddie Jackson and Kyle Fuller that combined for 13 interceptions. With a unit that doesn’t allow anything easy and creates takeaways at a ridiculous clip, the Bears are a popular Super Bowl bet because of their defense. Offensively, you would love to see Mitch Trubisky take that next step at quarterback and be more reliable with his arm, however, he’s surrounded by playmakers at wide receiver and has a deep stable of running backs. The Bears are creative with their offensive play calling and have even more bodies to throw at defenses with the additions of Mike Davis and David Montgomery.

The Green Bay Packers should be better all around, especially on defense with some of the additions they made. However, not playing Rodgers in the preseason could backfire against this Bears defense. It's not exactly the unit you want to knock off the rust against. The Green Bay Packers are 2-7-1 ATS in their last 10 games as an underdog. The Chicago Bears have covered 10 of their last 14 games as a favorite. The Chicago Bears are pretty much the same team they had last season and that defense gave Rodgers all sorts of issues in the two games last year. And while points and one of the top quarterbacks in the league looks intriguing, the Packers don't often cover in the underdog role. I'll lay the field goal with the Bears at home.