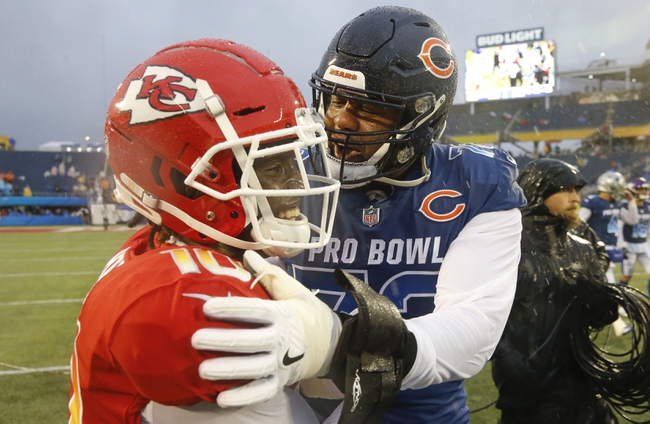 The Kansas City Chiefs are on the road for a primetime matchup with the Chicago Bears on Sunday Night Football.  The Chiefs are (10-4), coming off a 23-3 win over the Denver Broncos.  The Bears are (7-7), after falling to the Green Bay Packers, 21-13.

In the Chiefs win over the Broncos, Kansas City was carried offensively by Patrick Mahomes.  Mahomes connected on 27 of 34 passes for 340 yds, while throwing 2 touchdowns and 1 interception.  Harrison Butker converted on all 3 field goal attempts, with a long of 44 yds.  The Chiefs out gained the Broncos, 419 to 251.  The Chiefs were able to sustain a more consistent offense in the snowy conditions then the Broncos.  Kansas City had 1 interception defensively.

In the Bears loss to the Packers, Chicago was guided during the game by Mitchell Trubisky.  Trubisky was 29 of 53 for 334 yds, while throwing 1 touchdown and 2 picks.  Allen Robinson added 125 yds receiving on 7 receptions.  Eddy Pineiro connected on 2 field goals.  The Bears did manage to out gain the Packers, 415 to 292.  Chicago had 3 turnovers in the game, which hurt their chances, as the Packers committed 0 turnovers.

Chiefs are 4-0 ATS in their last 4 games overall.

The under is 4-1 in Chiefs last 5 games as the favorite.

Bears are 1-4 ATS vs a team with a winning record.

This matchup is a tale of two different minded teams.  The Chiefs excel on offense, ranking 4th in scoring offense, while the Bears excel on defense, ranking 3rd in scoring defense.  One area to make note of, the Chiefs have a better road record than home record.  The Chiefs are 6-1 on the road, while the Bears are 4-3 at home.  The under is on a roll in the Chiefs last 4 games, going 4-0.  When the Bears are at home, the under is 5-2.  I'll side with the under in this one, as the under has been profitable and the bears have a solid defense that should be able to keep the Chiefs under their offensive point average.  Final score prediction, Chiefs will win but the total goes under, 23-17.