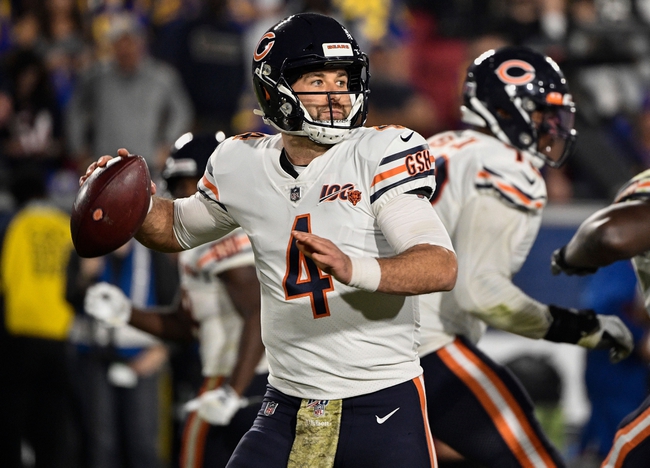 A battle of teams looking forward to next year will take place at Soldier Field on Sunday when the New York Giants (2-8) face the Chicago Bears (4-6). Both teams are in transition as the Bears hoped to replicate their success from last year and need the off-season to figure out what went wrong, while the Giants continue to move away from Eli Manning and toward Daniel Jones.

After two consecutive losses to open the season under Manning, New York went to Jones, won two in a row, and things looked great for Giants fans. But six straight losses in which the defense has allowed an average 32.0 per game in that stretch hasn’t allowed Jones much of a chance to lead his team to a win. The problem is that the Giants are scoring on offense -- including 27 points in last week’s 34-27 loss to the Jets -- but the defense has been so bad, it hasn’t much mattered.

Jones was brilliant against the Jets. He completed 26-of-40 passes for 308 yards and four touchdowns while receiver Darius Slayton caught 10 passes for 121 yards and two touchdowns and Golden Tate caught four passes for 95 yards and two scores. The problem for the Giants, though, was a lack of a rushing attack as Jones was the leading gainer on the ground with 20 yards on three carries. Saquon Barkley carried the ball 13 times for just one yard. And despite having Barkley on the team, New York has struggled rushing the ball this year which would help Jones out passing the ball. The Giants are just 22nd in the NFL in rushing at 94.2 yards per game, which might play into the Bears’ hands as they are 7th in the league in rushing defense allowing just 95.6 yards per game.

The Bears opened the season at 3-1 with a narrow 10-3 loss to Green Bay as the lone blemish early on, but Chicago has gone 1-5 since with losses to both Los Angeles teams, Oakland, New Orleans, and Philadelphia. The lone win in that span was a 20-13 victory over Detroit two weeks ago. Interestingly enough, Chicago’s losses have come against some pretty decent teams as their losses came against teams with a combined record of 33-24.

Chicago has been all over the place on offense. The Bears are the 28th ranked offense in the NFL averaging just 79.9 yards per game. Chicago has had just one 100-yard rusher this year when David Montgomery ran for 135 yards in the 17-16 loss to the Chargers. Incredibly, the Bears have been worse passing the ball, coming in at No. 30 out of 32 NFL teams in passing at just 182.8 yards per game. Quarterback Mitchell Trubisky has not thrown for 300 yards in any game this year and has passed for less than 200 yards five times in 10 games. He was benched last week with an apparent hip injury, but the Bears claim that if healthy, Trubisky will be the starter.

Neither team is good against the spread with both holding just a 3-7 record overall in that circumstance. Trying to guess the total is a mess, considering that the Giants’ last five games have all been well over the 41 being given here and the Bears’ last four have all been well under that same 41. So just look at what makes sense. The Giants’ defense has been awful and the Bears haven’t been that bad. Is that reason enough to bet Chicago? This game may well be about which team is more motivated, and that would favor the Bears as well considering an unlikely six-game win streak to end the season would likely be enough to get Chicago in the postseason. Take the Bears at home minus the points and look for the same to continue -- Chicago is just not quite as bad as the Giants.