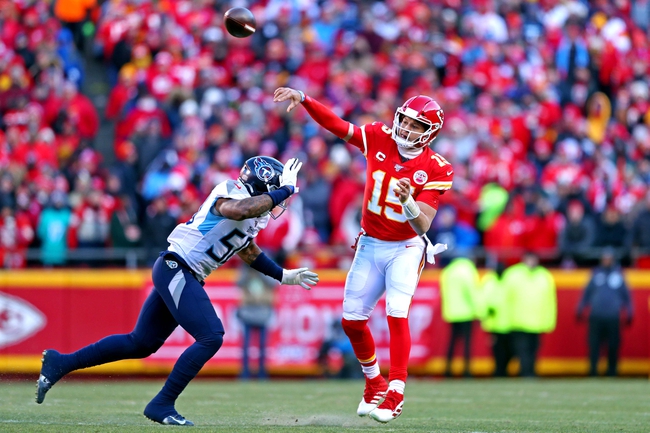 The 49ers (15-3) reached the Super Bowl following a 37-20 victory over the Green Bay Packers in the NFC Championship Game. Raheem Mostert led the 49ers with 220 yards rushing and four touchdowns. San Francisco's defense dominated Green Day for most of the game while the explosive offense used its strong ground game to wear down the Green Bay Packers front seven and keep the Packers offense off the field.

During the NFC postseason, Jimmy Garoppolo has thrown for 208 yards with one touchdown and one interception, while Raheem Mostert has led the 49ers ground game with 278 yards rushing and four touchdowns. Deebo Samuel has been the leading receiver for the 49ers with five receptions for 88 yards. On defense, Fred Warner leads the way with 13 tackles, while  Nick Bosa has three sacks.

The Kansas City Chiefs (14-4) reached the Super Bowl by defeating the Tennessee Titans 35-24 in the AFC Championship game. Kansas City once again was led by its explosive offense as quarterback Patrick Mahomes threw for 294 yards and three touchdowns, while Sammy Watkins caught seven passes for 114 yards and one touchdown. Mahomes also scrambled for 53 yards and one touchdown. The Chiefs defense allowed the Titans just 295 yards of total offense.

During the AFC postseason, Patrick Mahomes has thrown for 615 yards and eight touchdowns with no interceptions for Kansas City. Mahomes is also leading the Chiefs in rushing with 106 yards and one touchdown, while Damien Williams has 92 yards rushing and three touchdowns. The leading receiver for the Chiefs during the postseason has been Sammy Watkins with nine receptions for 190 yards and one touchdown. On defense, Daniel Sorensen leads the way with 17 tackles while Frank Clark has four sacks.

The San Francisco 49ers do not have any glaring weaknesses on their team but the defensive secondary could be a liability and the 49ers have not played well when facing a mobile quarterback such as Patrick Mahomes, who rushed for 53 yards against the Titans in the AFC Championship game.  Kansas City must continue with its explosive passing attack and on defense find a way to stop the ground game of the 49ers. Final Score Prediction, Kansas City Chiefs win and cover ATS 28-24.