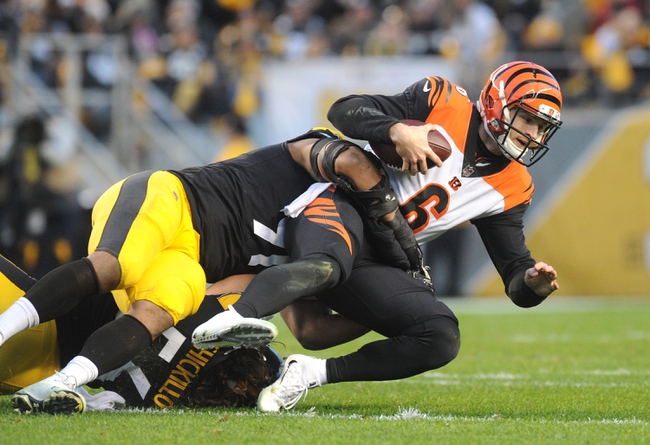 The Cincinnati Bengals and the Pittsburgh Steelers meet in a week 4 AFC North division tilt in NFL action from Heinz Field on Monday Night Football.

The Cincinnati Bengals will be looking for their first win of the season after falling to 0-3 on the year after a 21-17 loss to Buffalo in their last outing. Andy Dalton has thrown for 979 yards, 5 touchdowns and 3 interceptions on 62.8% passing while Joe Mixon leads Cincinnati’s rushing attack with 87 rushing yards. John Ross III leads Cincinnati’s receiving group with 292 receiving yards and 3 touchdowns while Tyler Boyd had a team-high 24 receptions for 250 yards. Preston Brown leads Cincinnati’s defense with 24 total tackles and Jessie Bates III is right behind in 2nd with 23 total tackles. Shawn Williams and Sam Hubbard each had 22 total tackles with Shawn Williams logging a team-high 16 solo tackles while Hubbard has a pair of sacks. As a team, Cincinnati is averaging 350.3 yards of total offense and 18 points per game while allowing 406.3 yards of total defense and 27.7 points per game against this season.

The Pittsburgh Steelers will also be looking for their first win of the year after dropping to 0-3 with a 24-20 loss to San Francisco in their last outing. Mason Rudolph has thrown for 286 yards 4 touchdowns and 2 interceptions on 56.5% passing while James Conner leads the Steelers in rushing with 97 rushing yards and a touchdown. JuJu Smith-Schuster leads the Steelers with a team-high 14 catches on 23 targets with 243 receiving yards this season. Defensively, Devin Bush and Terrell Edmunds are tied for the team-high with 28 total tackles, with Edmunds leading Pittsburgh with 20 solo tackles while Stephon Tuitt leads Pittsburgh with 3.5 sacks this season. As a team, Pittsburgh is averaging 269.3 yards of total offense and 16.3 points per game while allowing 442 yards of total defense and 28.3 points per game against this season.

This line is tough, as both teams could at least have one win under their belts if things had played out differently. For Cincinnati, they almost beat Buffalo before the Bills drove and scored a late touchdown, and narrowly lost to Seattle in week 1. Pittsburgh would for sure be different if they didn’t lose Big Ben and had a couple of close calls in their last couple of outings. What’s for sure, is that both teams are struggling to put points on the board for long stretches and both play a tough defensive style that can make scoring hard on the other side. This has the feeling of a 17-14 or 20-14 or 21-17 type game, which is why I’m going to side with the under.