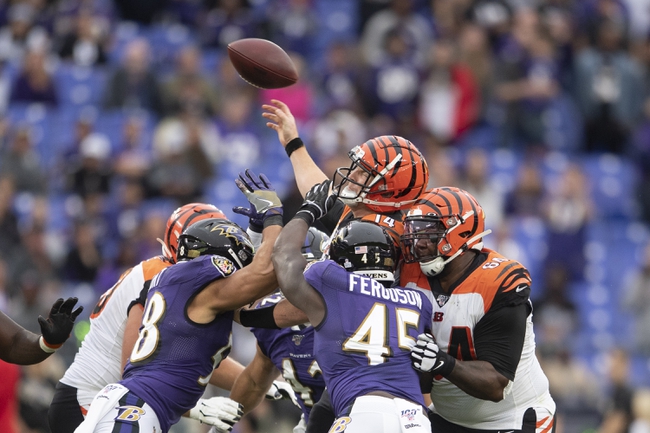 The Baltimore Ravens take their record of (6-2) on the road to face off against the winless Cincinnati Bengals (0-8).  The Ravens are coming off a huge upset win over the New England Patriots, 37-20.  The win for the Ravens handed the Patriots their first loss.  The Bengals were on a bye this past week.

In the win over the Patriots, Lamar Jackson got the scoring started, scoring on a 3 yds touchdown run. The Ravens led 17-0 before the Patriots were able to get on the board.  Jackson completed 17 of 23 passes for 163 yds, a touchdown and no picks.  Mark Ingram did his part, rushing for 115 yds on 15 carries. The Ravens out gained the Patriots 372 to 342 in the game.  The Ravens as a team rushed for 210 yds.  The Ravens forced 2 turnovers defensively.

The Bengals have been struggling and haven't been able to find themselves offensively or defensively.  Going into this game, it looks like the Bengals will be turning to someone other then Andy Dalton at quarterback.  The Bengals have benched Dalton ad will be turning to the likes of Ryan Finley.  It would be rude to say that all this is Dalton's fault, the defense hasn't been there and the offensive line hasn't shown up yet.  Dalton has about zero time to throw when in the pocket, not to mention the Bengals can't rush the ball either.  Joe Mixon is averaging 40 yds per game.  Mixon has rushed for 320 on 101 carries.  The holes just haven't been their for Mixon to get anything going.

Bengals are 1-4 ATS in their last 5 games overall.

Bengals are 1-8 ATS in their last 9 home games.

The Bengals are a disaster to this point and like I said, this can't just fall on the shoulders of Dalton.  The Bengals will see what Finley can do but with no offensive line, it will be tough sledding with even a new guy at quarterback.  The Bengals rank dead last in rushing yds per game.  The Cincinnati defense also ranks last in rushing yds allowed.  That does not look good, when you have the Ravens coming to town, who have the best rushing offense in the league.  Ravens win here and the Bengals will still be searching for their first win, come week 11.  Final score prediction, Ravens win and cover, 34-17.