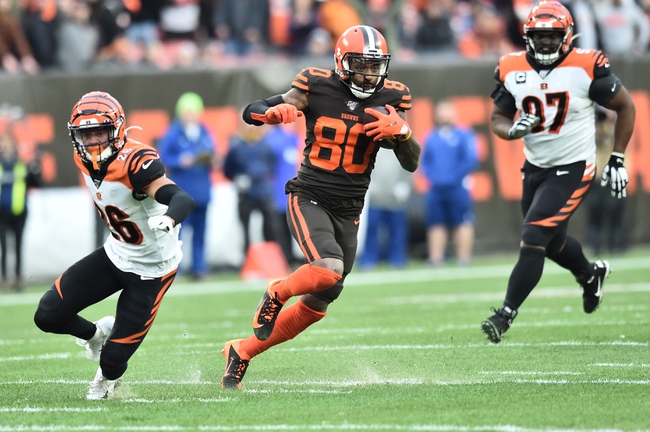 The Cleveland Browns head to Cincinnati, Ohio Sunday for a game against the Bengals in a matchup of teams from the bottom of the AFC North.  In their last game, the Browns were defeated by the Baltimore Ravens by the score of 31-15.  Browns quarterback Baker Mayfield completed 20 of 33 passes for 192 yards and 2 touchdowns against 1 interception.  Nick Chubb was the Browns leading rusher as he carried the ball 15 times for 45 yards.  Jarvis Landry was the most productive Cleveland receiver on the day as he caught 7 passes for 74 yards.  The Browns gained a total of 241 yards against the Ravens while allowing 481 total yards.

With the loss against Baltimore, Cleveland fell to 6-9 on the season and are in 3rd place in the AFC North.  Browns quarterback Baker Mayfield has thrown for 3,548 yards and 19 touchdowns against 18 interceptions so far this season.  Running back Nick Chubb has been the leading rusher for Cleveland as he has carried the ball 285 times for 1,453 yards and 8 touchdowns.  Jarvis Landry is the lead receiver for the Browns as he has caught 81 passes for 1,092 yards and 5 touchdowns for far this year.  The Browns enter Sunday’s game with 2 players listed on their injury report as Kendall Lamm and Olivier Vernon are both listed as questionable.

The Cincinnati Bengals welcome the Cleveland Browns to town after losing their last game to the Miami Dolphins by the score of 38-35 in overtime.  Bengals quarterback Andy Dalton completed 33 of 56 passes for 396 yards and 4 touchdowns.  Bengals running back Joe Mixon led the way on the ground for his team, rushing 21 times for 50 yards.  Wide receiver Tyler Boyd was the leading receiver on the day for Cincinnati as he caught 9 passes for 128 yards and 2 touchdowns in the game against the Dolphins.  The Bengals offense gained a total of 430 yards in the game while their defense allowed 502 total yards.

With the loss against Miami, Cincinnati is now 1-14 on the year and is in 4th place in the AFC North and have secured the #1 overall pick in next year’s NFL draft.  Quarterback Andy Dalton has now thrown for 3,304 yards and 15 touchdowns against 13 interceptions.  Running back Joe Mixon has led the Bengals on the ground rushing 252 times for 975 yards and 3 touchdowns this season.  Tyler Boyd has been the leading receiver for Cincinnati as he has caught 85 passes for 987 yards and 5 touchdowns this year.  The Bengals enter Sunday’s game with 4 players listed on their injury report as Tony McRae, William Jackson III, Tyler Boyd and John Miller are all listed as questionable.