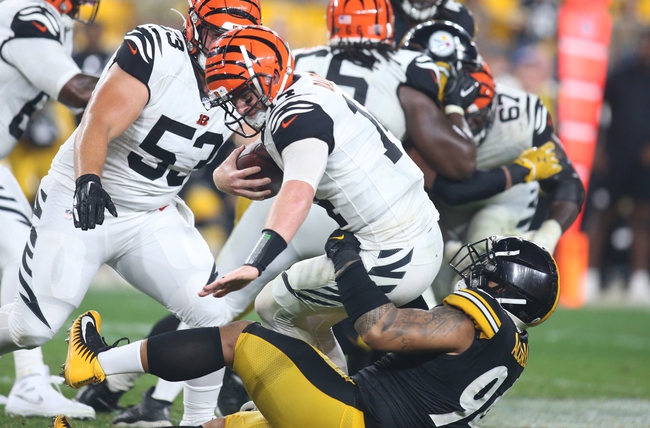 The Pittsburgh Steelers are on the road for a matchup with the Cincinnati Bengals.  The Steelers are (5-5) thus far, coming off a 21-7 loss to the Cleveland Browns.  The Bengals (0-10) are still searching for that first win.  Bengals fell to the Raiders, 17-10 on the road.

In the Steelers loss to the Browns, Pittsburgh was carried by quarterback Mason Rudolph.  Rudolph was 23 of 44 for 221 yds, throwing 1 touchdown and 4 picks.  Pittsburgh saw one touchdown in the game, it was a 3 yds passing touchdown from Rudolph to Jaylen Samuels.  The Steelers were out gained 293 to 236 in the game.  Pittsburgh was held to just 58 yds rushing, while giving up 104 on the ground.  Pittsburgh had 4 turnovers en route to the loss.

During the Bengals loss to the Raiders, Cincinnati was guided by Joe Mixon.  Mixon rushed for 86 yds on 15 carries and a score. Ryan Finley passed for 115 yds on 17 completions, while throwing 1 interception.  The Bengals were out gained by the Raiders, 386 to 246.  There were 4 turnovers in the game, 2 by each team.  The Bengals did out rush the Raiders on the day, 173 to 113.

Steelers are 6-2 ATS in their last 8 games overall.

The under is 4-1 in Steelers last 5 games overall.

Bengals are 2-5 ATS in their last 7 games overall.

Bengals are 0-4 ATS in their last 4 home games.

The under is 4-1 in Bengals last 5 games overall.

The under is 6-2 in the last 8 meetings between the two teams.  Neither offense is lighting up the scoreboard this year, Steelers are averaging 20 per game and the Bengals are averaging less than 15 per game.  With the Steelers only allowing 20 points per game as well, I like the under here.  The under has been profitable in the last 5 games in this series and has also cashed nicely in each teams last 5 games overall.  Final score prediction, Steelers win and the total goes under, 21-14.