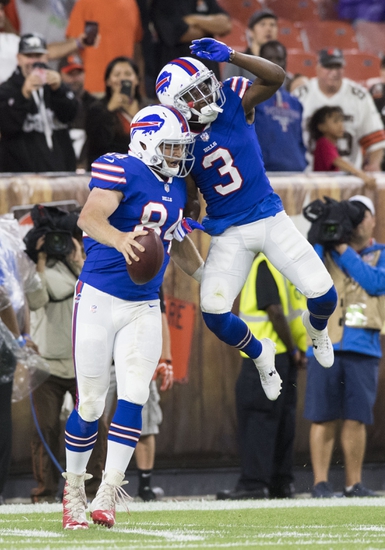 Cleveland, OH pairs two teams together that are going in opposite directions.  The Buffalo Bills enter the game with a record of (6-2).  The Bills enjoyed a 24-9 win over the Washington Redskins in their last game.  The Cleveland Browns are (2-6) on the season and are coming off a loss on to the road to the Denver Broncos, 24-19.

The Bills got out to an early lead, thanks to a 6yd touchdown reception from Cole Beasley from Josh Allen.  Allen was 14 of 20 on the day for 160 yds and a touchdown.  Allen also added a rushing touchdown in the game.  Bills running back Devin Singletary rushed for 95 yds on 20 carries and a score.  The Bills defense held the Redskins to just 116 passing yds.  The Bills out gained the Redskins 268 to 243.  The Bills covered the spread in this one.

The Brown dropped another game and continue to under perform since the season started.  Browns quarterback Baker Mayfield was 27 of 42 for 273 yds and a touchdown.  Nick Chubb ran for 65 yds on 20 carries.  Jarvis Landry added his first receiving touchdown of the season.  The Browns out gained the Broncos in total offense, 351 to 302.  The Browns weren't able to find the end zone once they crossed midfield all that often.  Brown were kept in the game thanks to kicker Austin Seibert.  Seibert was 4 of 4 on field goals with a long of 39 yds.

Browns are 0-6 ATS in their last 6 games on grass.

The Browns will be going up against the 3rd ranked passing defense in the league and the 5th ranked defense in allowing the fewest points.  The Cleveland defense isn't stellar by any means, the Browns rank 29th in rushing yds allowed.  This plays into the rushing attack of Singletary and Allen.  The Browns will struggle in this one to contain Josh Allen.  The Bills defense should be able to contain a Browns offense that has been scuffling.  The Bills offense has had its issues this season as well, only averaging 19 points per game.  Josh Allen and the Bills will do enough offensively to win this one.  Final score prediction, Bills win and the total goes under, 23-14.