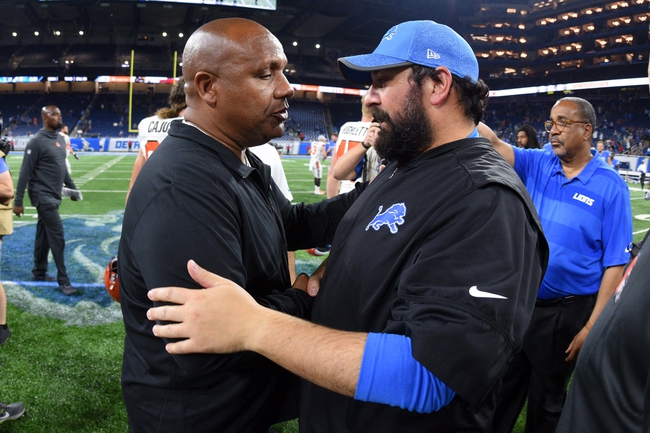 The Detroit Lions are 0-3 in preseason action after a 20-24 loss to the Buffalo Bills. Josh Johnson and Matthew Stafford combined for 208 passing yards and one touchdown. Mark Thompson led the Lions with 34 yards and one touchdown on eight carries, while T.J. Hockenson had 52 receiving yards on three receptions. Defensively, Tavon Wilson led the Lions with five tackles, Jalen Reeves-Maybin had one tackle for loss and Anthony Pittman had one tackle for loss. The Detroit Lions have had their issues defensively this preseason and are coming off a game against Buffalo where they struggled against the run and allowed 21 first downs. The Lions have allowed 24 or more points in each of their last six preseason games. The Detroit Lions have lost six of their last seven preseason games.

The Cleveland Browns fall to 2-1 in preseason play after a 12-13 loss to the Tampa Bay Buccaneers. Baker Mayfield and Drew Stanton combined for 109 passing yards, zero touchdowns and one interception. David Blough led the Browns with 12 yards on one carry, while D'Ernest Johnson had 43 receiving yards on three receptions. Defensively, Sheldrick Redwine led the Browns with five tackles, Olivier Vernon had two sacks and Joe Schobert had two tackles for loss. The Cleveland Browns are allowing just 13.6 points through three preseason games and have allowed 19 or less points in each of their last seven preseason games. Meaningless games or not, this has been a positive month for the Browns and their increased expectations. The Cleveland Browns have won five of their last seven preseason games.

The Detroit Lions are 0-3 this preseason and have lost six of their last seven preseason games overall. Outside of a one-point loss last week, the Cleveland Browns have been one of the more balanced and impressive teams throughout meaningless play. There's just a different vibe with these two teams, as the Lions are the same old Lions, and the Browns are playing with energy and a bit of a pep in their step. The Browns should win another preseason game.