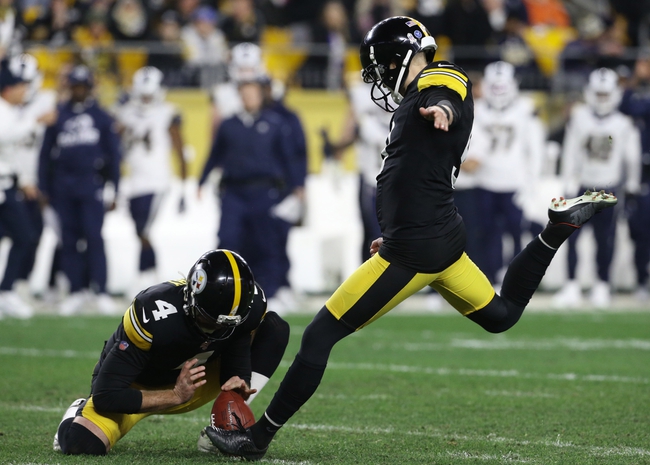 This Thursday night, 2 teams from the AFC North will match up in what should be an interesting game as the Pittsburgh Steelers head to Cleveland for a game against the Browns.  The Steelers enter Thursday’s game after winning their last game by the score of 17-12 against the Los Angeles Rams.  In Pittsburgh’s game against the Rams, Steelers quarterback Mason Rudolph completed 22 of 38 passes for 242 yards and a touchdown.  James Washington led Pittsburgh in receiving as he caught 6 passes for 90 yards and was the recipient of Rudolph’s touchdown pass.  Jaylen Samuels led the way for the Steelers on the ground as he carried the ball 14 times for 29 yards but failed to get into the endzone.  While the Steelers offense played okay, this game was dominated by the Pittsburgh defense as they allowed a total of 306 yards to the Rams offense while allowing just 88 yards on the ground.

With the win, the Steelers are now 5-4 on the season which is good enough for 2nd place in the AFC North Division.  The Steelers have won 4 games in a row since starting the season 0-3.  Since taking over for Ben Roethlisberger, Mason Rudolph has thrown for 1,330 yards, 11 touchdowns and 4 interceptions.  Juju Smith-Schuster has had a decent season thus far and is Pittsburgh’s lead receiver as he has caught 36 passes on the year for 503 yards and 3 touchdowns.  Running back James Conner has continued being productive out of Steelers backfield this season and has carried the ball 97 times for 380 yards and 4 touchdowns on the year.  There are 5 players listed on the Steelers injury report this week as Roosevelt Nix and James Conner are out while Olasunkanmi Adeniyi, Anthony Chickillo and Ryan Switzer are listed as questionable.

The Cleveland Browns welcome the Pittsburgh Steelers into town after winning their last game against the Buffalo Bills by the score of 19-16.  Baker Mayfield (who kept the same facial hair the whole day) completed 26 of 38 passes for 238 yards and 2 touchdowns on the day.  Jarvis Landry was the Browns’ lead receiver has he caught 9 passes for 97 yards and a touchdown.  Nick Chubb led the way for the Browns on the ground as he carried the ball 20 times for 116 yards.  The Cleveland defense allowed a total of 344 yards to the Bills offense but allowed just 84 rushing yards on the day.

The win for the Browns was their first win at home this season and snapped a 4 game losing streak.  The Browns are now 3-6 on the season and are currently in 3rd place in the AFC North.  Baker Mayfield has now thrown for 2,201 yards and 9 touchdowns on the year against 12 interceptions.  Nick Chubb is the leading rusher for the Browns as he has rushed for 919 yards and 6 touchdowns on 174 attempts.  Wide receiver Jarvis Landry has been the most productive Browns receiver has he has caught 45 passes for 652 and 2 touchdowns on the season.  The Browns enter Thursday’s game with 4 players listed on their injury report as Kendall Lamm, Ricky Seals-Jones, Eric Murray and Olivier Vernon are all listed as out.