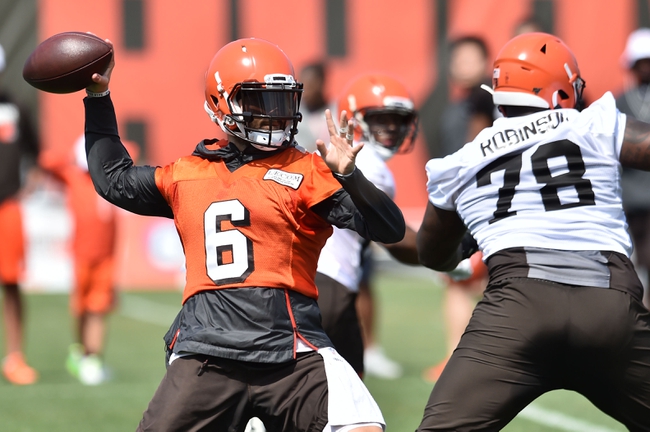 The Washington Redskins and the Cleveland Browns will kick off Week 1 of the NFL Preseason with a matchup on Thursday.

The Redskins missed the playoffs for a third straight season in 2018, repeating their 2017 record of 7-9 and finishing third in the NFC East. The upside is that the Redskins started out 6-3, but faltered after losing starting QB Alex Smith.

Things will look different at QB for the Redskins this season following a first-round pick on Dwayne Haskins. Most pundits have Haskins sitting briefly at the beginning of the year and gradually taking the reins as 2019 rolls on.

Over on the Cleveland side, they’re one of the league darlings (finally) heading into the 2019 season. The Browns made some marked improvements over their dismal 0-16 2017 campaign, finishing 7-8-1 in 2018.

Young QB Baker Mayfield is the unquestionable keystone in not only the Browns offense but in the entire perception of the team. If Mayfield can take another step forward after his rookie-record 27 touchdown passes last year, we may have something special in Cleveland this year.

Both of these teams have young cores and will be developing before our eyes this season. Mayfield specifically has a lot on his shoulders, and whether or not he can carry the load will be interesting to watch as the season unfolds.

Still, none of the high-end starters matter here, but with the buzz and energy in Cleveland right now I have to go Browns for a win in this opener.