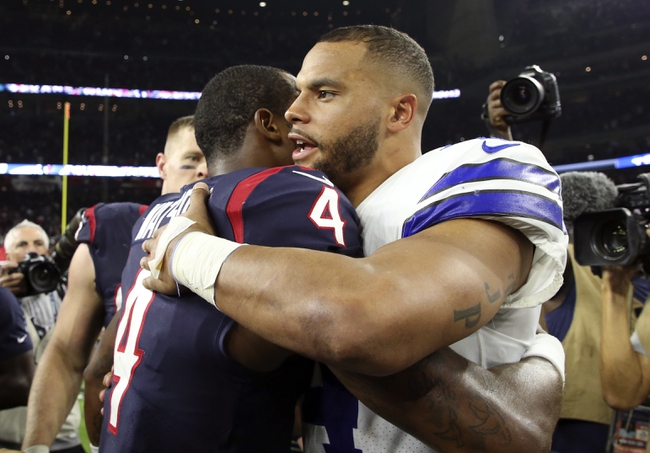 The Houston Texans are 1-1 in preseason action after a 30-23 win over the Detroit Lions. Josh Webb and Deshaun Watson combined for 246 passing yards, two touchdowns and one interception. Buddy Howell led the Texans with 84 yards and one touchdown on 15 carries, while DeAndre Carter had 40 receiving yards on three receptions. Defensively, Derrick Baity Jr. led the Texans with six tackles, Whitney Mercilus had one sack and Brandon Dunn had one tackle for loss. The Houston Texans have seen some sharp quarterback play through the first two games, and the defensive effort was much better in the second contest, holding the Lions to 1-11 on third down attempts. This game should give us a much better idea of where Watson is in his progress, as he’s given us a mixed bag through his first two years in the league. The Houston Texans have won four of their last six preseason games.

The Dallas Cowboys are also 1-1 in preseason play after a 14-10 win over the Los Angeles Rams. Cooper Rush and Day Prescott combined for 147 passing yards and one touchdown. Tony Pollard led the Cowboys with 42 yards and one touchdown on five carries, while Michael Gallup had 31 receiving yards on one reception. Defensively, Justin March-Lillard led the Cowboys with nine tackles, Justin Phillips had seven tackles and Donovan Olumba had one tackle for loss. The Dallas Cowboys defense has led the charge through two games, allowing a combined 27 points and pitching shutouts in four of the eight quarters. We know the Cowboys can move the ball offensively, but if that defense can carryover to the regular season, America’s Team could actually be a force in 2019. The Dallas Cowboys have lost five of their last six preseason games.

The Houston Texans played better defensively in their last game and we're likely getting a heavy dose of Watson in this contest. The Dallas Cowboys snapped their preseason losing streak in Hawaii, and the defense has been lights out for the most part. The bottom line here is that we can trust the Cowboys starters a lot more than the Texans, and we don't have to lay much chalk with them at home. The Dallas Cowboys and the small line seems like one of the better plays in week three of the preseason.