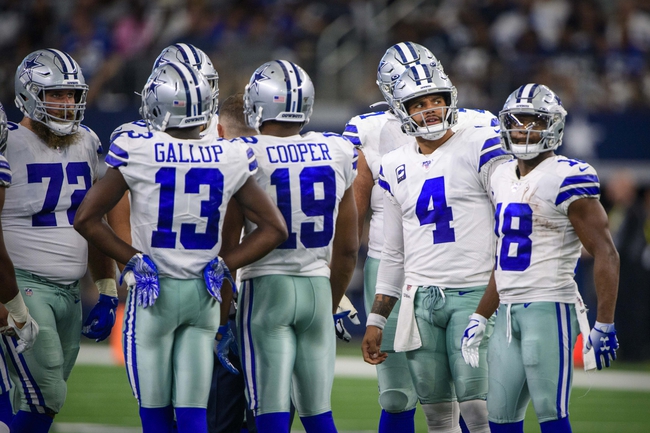 The Miami Dolphins need a win here to rebound from a rough 0-2 record when they take the road for the first time. The Miami Dolphins have lost their last seven road games. Ryan Fitzpatrick is completing 50 percent of his passes for 274 yards, one touchdown and four interceptions. Fitzpatrick has two or more touchdown passes in five of his last eight games. Preston Williams and DeVante Parker have combined for 162 receiving yards and one touchdown while Kenyan Drake has seven receptions. The Miami Dolphins ground game is averaging 31.5 yards per contest, and Drake leads the way with 31 yards on 10 carries. Defensively, Miami is allowing 51 points and 512 yards per game. Jerome Baker leads the Miami Dolphins with 21 tackles, Vince Biegel has one sack and Eric Rowe has two pass deflections.

The Dallas Cowboys look for another victory to start a season 3-0 for the first time since 2008. The Dallas Cowboys have won their last five home games. Dak Prescott is completing 82.3 percent of his passes for 674 yards, seven touchdowns and one interception. Prescott has three or more touchdown passes in four of his last six games. Michael Gallup and Amari Cooper have combined for 376 receiving yards and two touchdowns while Randall Cobb has nine receptions. The Dallas Cowboys ground game is averaging 151 yards per contest, and Ezekiel Elliott leads the way with 164 yards and two touchdowns. Defensively, Dallas is allowing 19 points and 362.5 yards per game. Jaylen Smith leads the Dallas Cowboys with 17 tackles, Tyrone Crawford has one sack and Jeff Heath has three pass deflections.

The Miami Dolphins have failed to cover eight of their last 12 games as a double-digit underdog. The Dallas Cowboys have split their last eight games ATS as a double-digit favorite. It's really strange to see these type of numbers in the NFL, as laying three touchdowns is something you usually see in college. I gave the Dolphins a chance last week as monster underdogs, and their first three games haven't been close to being competitive. We know the Dolphins gutted their roster and are building on cap space and draft picks, but this roster has done nothing right and there's not a single case you can make to suggest things can turn around. I'm not the chalky guy and love to make cases for underdogs, but there's nothing positive to say about the Dolphins right now. It's Cowboys in a blowout or pass.