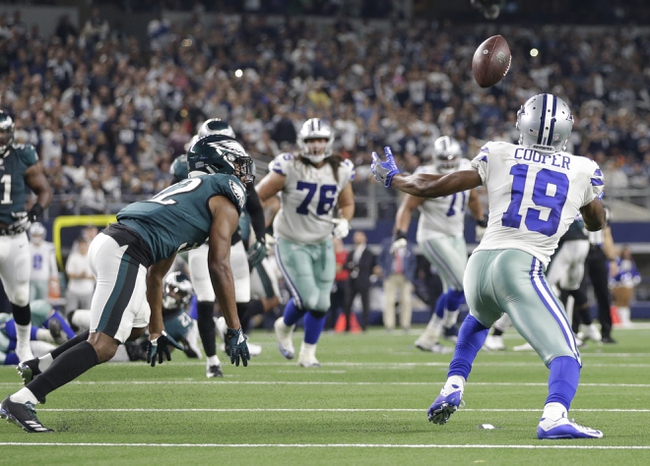 Primetime football takes us to Dallas, TX where the Cowboys play host to the Philadelphia Eagles.  The Eagles enter this road contest with a record of 3-3. The Eagles are coming off a road loss to the Minnesota Vikings 38-20.  The Dallas Cowboys enter this game with a record of 3-3 as well. The Cowboys are hoping to turn the table here as of late. The Cowboys lost last week to the New York Jets 24-22, pushing their losing skid to 3 games.

Carson Wentz last week threw for 306 yds on 26 completions for 2 TD’s and 1 INT.  Alshon Jeffery had 10 receptions for 76 yds and 1 touchdown in the loss. Wentz on the season has thrown for 1,458 yds and 12 touchdowns, while only throwing 3 picks.  Jordan Howard leads the backfield with 297 yds rushing. He has hit paydirt 4 times. The Eagles are led defensively by safety Rodney McLeod, he has totaled 35 tackles and 1 interception.

In the loss to the Jets, Ezekiel Elliot ran for 105 yds on 28 carries and 1 touchdown.  Quarterback Dak Prescott completed 28/40 passes for a total of 277 yds. Tavon Austin led the Cowboys in receiving with 64 yds.  Xavier Woods and Leighton Vander Esch each had 10 tackles in the game. On the season Prescott has thrown for 1,883 yds and a 11/6 TD to INT ratio. Elliot had 5 rushing touchdowns on the season.

The Eagles are allowing 25 points per game this season and the Cowboys are allowing an average of 19.  The Cowboys have been so good ATS in division games since 2017 and I don’t see that changing. Look for Prescott to pick apart an Eagles defense that rank’s 29th in pass defense.  Final score prediction, the Cowboys win and cover this spread 28-24