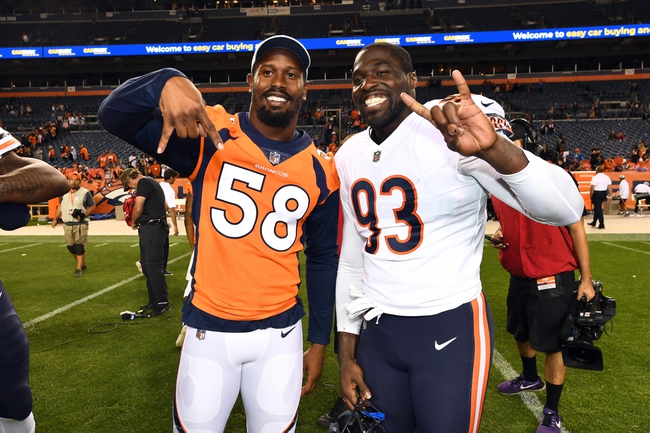 The Chicago Bears look for a bounce back showing after losing their opener to the Green Bay Packers, 10-3. The Chicago Bears have won four of their last five road games. Mitchell Trubisky is completing 57.8 percent of his passes for 228 yards, zero touchdowns and one interception. Trubisky has zero touchdown passes in three of his last four games. Allen Robinson and Tarik Cohen have combined for 151 receiving yards on 18 catches while David Montgomery has one reception. The Chicago Bears ground game is averaging 46 yards per contest, and Mike Davis leads the way with 19 yards on five carries. Defensively, Chicago is allowing 10 points and 213 yards per game. Kyle Fuller leads the Chicago Bears with six tackles, Leonard Floyd has two sacks and Prince Amukamara has two pass deflections.

The Denver Broncos also need a win after losing to the Oakland Raiders on Monday night. The Denver Broncos have lost five of their last six home games. Joe Flacco is completing 67.7 percent of his passes for 268 yards, one touchdown and zero interceptions. Flacco has two or more touchdown passes in four of his last eight games. Courtland Sutton and Emmanuel Sanders have combined for 206 receiving yards and one touchdown while Noah Fant has two receptions. The Denver Broncos ground game is averaging 95 yards per contest, and Royce Freeman leads the way with 56 yards on 10 carries. Defensively, Denver is allowing 24 points and 357 yards per game. Josey Jewell leads the Denver Broncos with 14 tackles, Chris Harris Jr. has one tackle for loss and Adam Gotsis has one tackle for loss.

The Chicago Bears have covered five of their last seven games as an underdog, which includes winning their last two outright. The Denver Broncos are 2-8-1 ATS in their last 11 games as a favorite. This game really comes down to which offense you think can squeeze out one or two plays that result in points. These are two solid defensive clubs with question marks offensively. For me, I give the Bears the edge because of the schedule spot. The Bears have had a week and a half to prepare for this game after opening the season last Thursday, while the Broncos played Monday night, so they have less than your typical week to get ready. Also, it's not encouraging to see the Broncos offense struggle to move the ball against Oakland, one of the worst defenses in the league last year. I'll take the Bears in this toss-up.