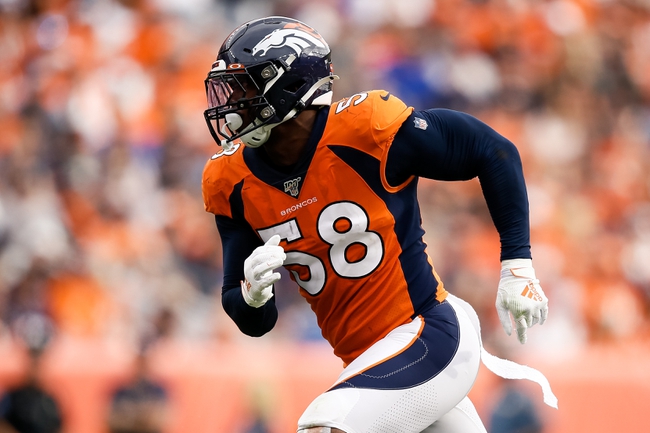 The Denver Broncos need a victory here to save their season and avoid an 0-4 record. The Denver Broncos have lost their last three home games. Joe Flacco is completing 69.1 percent of his passes for 773 yards, two touchdowns and two interceptions. Flacco has two or more touchdown passes in four of his last 10 games. Courtland Sutton and Emmanuel Sanders have combined for 441 receiving yards and two touchdowns while Phillip Lindsay has 12 receptions. The Denver Broncos ground game is averaging 111.3 yards per contest, and Royce Freeman leads the way with 173 yards on 36 carries. Defensively, Denver is allowing 22.3 points and 314 yards per game. Josey Jewell leads the Denver Broncos with 26 tackles, Bradley Chubb has four tackles for loss and Kareem Jackson has three pass deflections.

The Jacksonville Jaguars are 4-4-1 ATS in their last nine games as a road underdog. The Denver Broncos are 0-6-1 ATS in their last seven games as a home favorite. The Broncos haven't covered a game as a home favorite since their 2017 October win over the Oakland Raiders. The Jaguars have had extra time to prepare for this game and could easily be 2-1 on the season in a wide open AFC South. The Broncos have yet to stop the free falling that an opening loss to Oakland started and the offense is averaging just 15.3 points. It's not easy to win in Denver and I expect the Broncos to play like a desperate team that needs a win here, however, you can make a case the Jaguars should be the favorites based on the way both teams have played through three games. I'll take a shot with the road team and the free field goal.