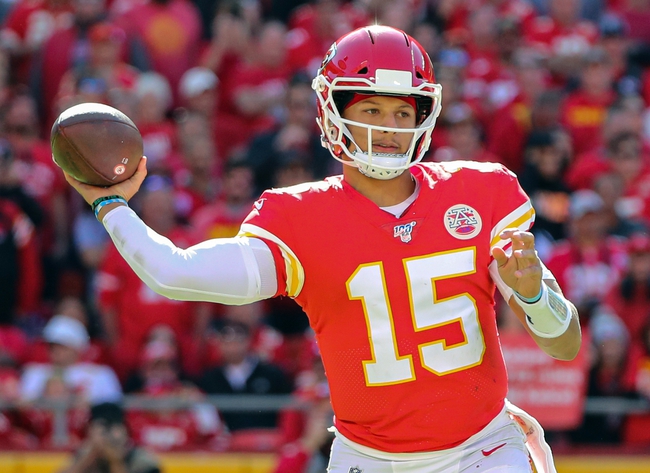 The Kansas City Chiefs hit the road for an AFC West matchup with the Denver Broncos.  The Chiefs enter this game with a 4-2 record, having lost their last two games. Most recently the Chiefs are coming off a 31-24 loss to the Houston Texans.  The Broncos enter this contest with a 2-4 record, having won their last 2 games. Both teams have been going in the opposite direction here in the last two weeks.

Patrick Mahomes was 19/35 for 273 yds, while throwing 3 TD’s and 1 pick. Running back LeSean McCoy led the backfield with 44 yds on 8 carries. Tyreek Hill did his part in the game, he reeled in 5 receptions for 80 yds and 2 touchdowns. The Chiefs were out gained offensively 472 to 309.  The Chiefs were able to force 3 turnovers defensively.

The Broncos are coming off a win where they shut out the Titans 16-0.  Broncos quarterback Joe Flacco was 18/28 for 177 yds and had 1 INT. Phillip Lindsay out worked fellow running back in Royce Freeman on the day.  Lindsay had 15 carries for 70 yds and a touchdown, while Freeman had 11 carries on 34 yds. The Broncos defensively stood tall on the day. Denver’s defense held the Titans to a 2-14 conversion rate on third down and forced 3 turnovers.  Broncos kicker Brandon McManus was 3 for 3 on field goals with a long of 53 yds.

While the over has had success in cashing tickets during Chiefs games, the Broncos over has just been pitiful over the last year and a half.  The Broncos defense has looked good the last two weeks, giving up a total of 13 points. While I do think the Chiefs will put up a decent amount of points, I’m just not that impressed with the Broncos offense. I am going to take the under in this game.  Final score prediction, Chiefs win 28-17 and the total goes under.