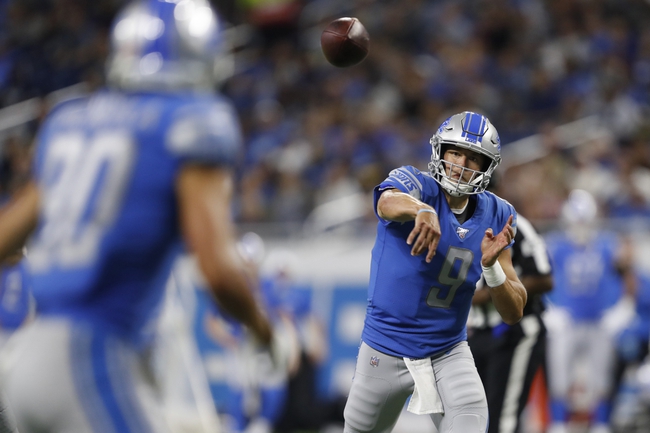 The Detroit Lions and the Arizona Cardinals meet in week 1 NFL action from State Farm Stadium on Sunday afternoon.

The Detroit Lions will look to forget about the preseason after finishing with an 0-4 preseason record following a 20-16 loss to Cleveland in their last outing. Josh Johnson threw for 157 yards and a touchdown on 9 of 15 passing while also rushing for a touchdown as well while Mark Thompson led the Lions with 35 rushing yards. Travis Fulgham had 3 receptions for a team-high 80 receiving yards while Isaac Nauta logged 3 grabs for 45 yards and a touchdown. Defensively, Eric Lee had a sack and Johnathan Alston and Jamar Summers each had an interception while Andre Chachere and P.J. Johnson each had a team-high 6 tackles.

The Arizona Cardinals will also hope for a better turnout in the regular season after losing three straight to finish the preseason, including a 20-7 loss to Denver to finish the preseason at 1-3. Drew Anderson threw for 118 yards and a touchdown on 9 of 16 passing while Brett Hundley had 55 yards on 7 of 8 passing and Chad Kanoff had an interception. Anderson led the Cardinals in rushing with 20 yards on 2 carries while A.J. Richardson had 5 receptions for a team-high 67 yards and the Cardinals’ lone touchdown reception. Defensively, the Cardinals combined for 3 interceptions and a forced fumble while Vontarrius Dora had a sack and Nate Brooks and Dennis Gardeck recording a team-high 6 tackles with Brooks registering one interception and the previously mentioned forced fumble.

The points with Arizona at home are tempting, but I’m not overly confident in backing a rookie quarterback making his regular season debut against a Detroit team that’s better than what we saw in the preseason, especially on defense. I’m a bit concerned about Detroit’s depth, but Arizona’s starting offensive line wasn’t all that effective in the preseason and I just feel that the Lions have fewer question marks coming into this one, so I’ll lay the points with Detroit on the road here.