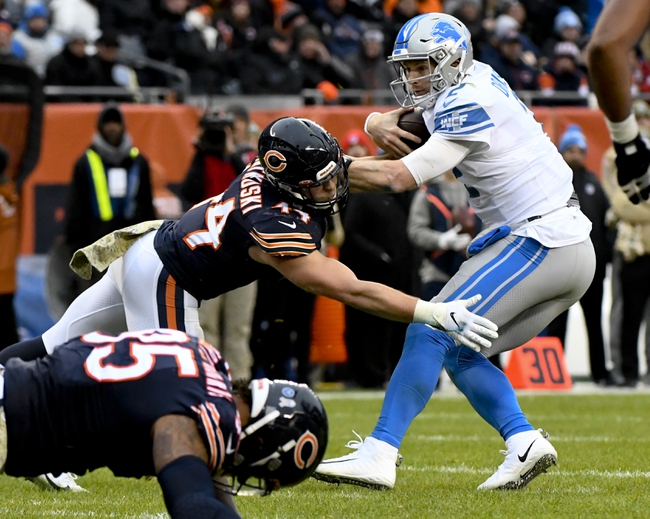 The Chicago Bears to Detroit, MI this Thursday for a Thanksgiving Day matchup with the Detroit Lions in a game between two teams in the NFC North.  The Bears enter Thursday’s game against the Lions after a win in their last game against the New York Giants, winning 19-14.  Mitchell Trubisky completed 25 of 41 passes for 278 yards and 1 touchdown against 2 interceptions.  Running back Tarik Cohen was the lead rusher for the Bears as he rushed for 25 yards on 6 carries.  Allen Robinson II was the leading receiver for Chicago as he caught 6 passes for 131 yards and a touchdown on the day.  The Bears defense allowed 243 total yards against the Giants which included just 109 yards on the ground.

With the win, the Bears moved to 5-6 on the season, good enough for 3rd place in the NFC North.  Mitchell Trubisky has now thrown for 1,858 yards and 10 touchdowns against 6 interceptions on the season.  David Montgomery has led the way for Chicago on the ground this season, carrying the ball 156 times for 519 yards and 5 touchdowns.  The leading receiver for the Bears is Allen Robinson II who has caught 63 passes for 764 yards and 4 touchdowns on the season.  The Bears come into Thursday’s game with 4 players listed on their injury report as Sherrick McManis is listed as questionable while Adam Shaheen, Danny Trevathan and Bobby Massie are all listed as out.

The Detroit Lions welcome the Chicago Bears into town after losing their last game in Washington D.C. to the Redskins by the score of 19-16.  Quarterback Jeff Driskel completed 20 of 33 passes for 207 yards, 1 touchdown and 3 interceptions.  Bo Scarbrough was the leading rusher for the Lions as he ran 18 times for 98 yards. The lead receiver for the Lions was Kenny Golladay who caught 4 passes for 61 yards but didn’t record a touchdown.  The Lions defense allowed a total of 230 yards to the Redskins and held Washington to 189 yards through the air.

With the loss, Detroit Is now 3-7-1 on the season and is in 4th place in the NFC North.  Quarterback Jeff Driskel has thrown for 685 yards and 4 touchdowns against 4 interceptions on the season in place of the injured Matthew Stafford.  Kerryon Johnson who is on injured reserve is on injured reserve but still leads the Lions in rushing as he has carried the ball 92 times for 308 yards and 2 touchdowns.  Kenny Golladay has been the Lions lead receiver on the year as he has caught 43 passes for 792 yards and 8 touchdowns on the season.  The Lions have been decimated by injuries all season and currently have 5 players listed on their injury report along with Kerryon Johnson being on injured reserve as Frank Ragnow, Tracy Walker, Da’Shawn Hand, Rashaan Melvin and Matthew Stafford are all listed as out.