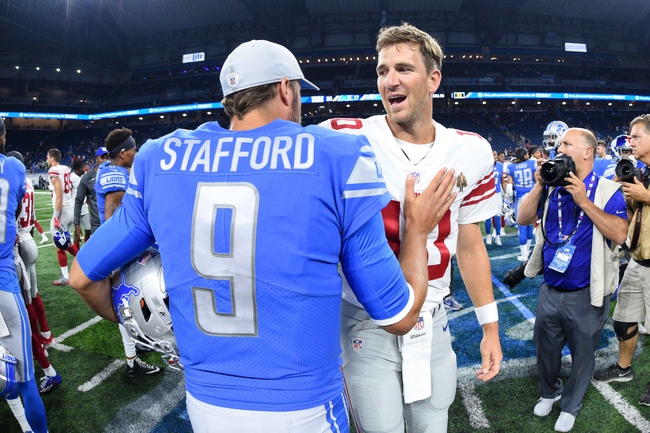 Giants quarterback Daniel Jones has completed 61% of his passes for 1,144 yds, while throwing 6 TD's and 7 INT's.  He also has rushed for 2 scores.   The Giants are hoping Barkley can get back to 100%, as injuries have held him to 309 yds rushing and 2 scores through 4 games. Evan Ingram leads the receiving core with 34 receptions and 379 yds.  Ingram has also missed a game this year due to injury.  He has 2 touchdowns on the season.  Defensively the Giants are led in tackles by safety Antoine Bethea with 55.

The Lions are led by veteran quarterback Matthew Stafford, he has thrown for 1,751 yds.  He has a TD/INT ratio of 13/3.  The Lions are hoping running back Kerryon Johnson will be ready to go this week, he left the game with an injury on Sunday.  Johnson on the season has 308 yds rushing and 2 touchdowns. The receiving core is led by the duo of Marvin Jones Jr. and Kenny Golladay. Jones who had 4 touchdowns in the loss to the Vikings now has 5 scores for the season.  He has 387 yds receiving and 30 receptions to this point.  Golladay has found the end zone 4 times, while totaling 385 yds receiving.

The Giants are 1-4 ATS this season as an underdog.

The over is 3-0 when the Giants are an away underdog this season.

The Lions are 4-2 ATS this season.

The over is 4-2 in Lions games this season.

When looking at the Lions schedule so far this season, there has only been one game where the game hasn't been decided by 4 points or less.  The Giants offensive success has a lot to do with how healthy and explosive Barkley is.  With him battling injuries the last couple weeks, its questionable if he will be able to handle his normal workload with his ankle injury.  The Lions and Giants defense have not been good this season, both are giving up almost 27ppg. Despite Barkley possibly not being at 100%, I am going to take the over in this game. Final score prediction, the Lions win and the total goes over 31-23.