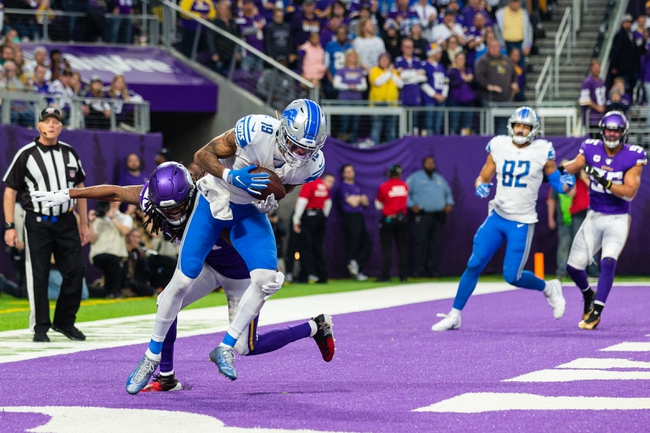 The Tampa Bay Buccaneers travel to Detroit to face off against the Lions.  The Buccaneers are (6-7), coming off a 38-35 win over the Indianapolis Colts.  The Lions are (3-9-1), after falling to the Minnesota Vikings, 20-7.

In the Buccaneers win over the Colts, Tampa Bay was led on offense by Jameis Winston.  Winston completed 33 of 45 passes for 456 yds, 4 touchdowns and 3 interceptions.  The Buccaneers trailed 35-21, before scoring 17 unanswered points.  Chris Godwin added 7 receptions for 91 yds.  Tampa Bay smoked Indianapolis in total yds, 542 to 309.  Tampa Bay had 4 turnovers compared to Indianapolis' 1.  Mike Evans left the game after a 61 yd touchdown reception in the win.

Buccaneers are 2-6-1 ATS in their last 9 games overall.

Buccaneers are 1-5 ATS in their last 6 vs the NFC.

Lions are 1-7 ATS in their last 8 games overall.

The road team is 5-1 ATS in the last 6 matchups.  Mike Evans looks to be out after an injury in the last game, but that shouldn't stop the Buccaneers from putting up points.  The Lions rank 30th in pass coverage, while the Buccaneers rank 2nd in offensive passing yds per game.  Tampa Bay is also averaging over 29 points per game.  The downfall is the Tampa bay defense is giving up just as many points per game that they are scoring on average.  Detroit will be able to put their fair share of points in this game, but will end up falling at home due to the Lions being without one of their play makers.  Detroit will be without Marvin Jones for this contest.  Final score prediction, Buccaneers will win and cover, 31-24.