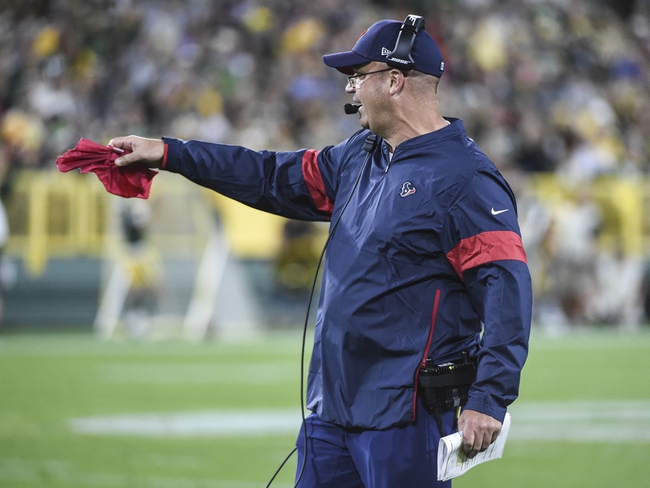 The Detroit Lions and the Houston Texans meet in week 2 NFL preseason action from NRG Stadium on Saturday night.

The Detroit Lions will look to bounce back from a disappointing start to the preseason after being routed 31-3 by New England in week 1 last time out. David Foles threw for 62 yards and an interception on 5 of 14 passing while Tom Savage went 2 for 3 for 40 yards before suffering a concussion. Ty Johnson led the Lions with 22 rushing yards on 3 carries while Mark Thompson came right behind with 21 rushing yards on 4 carries. Tom Kennedy’s lone reception gave him the team-high with 29 receiving yards while Brandon Powell and Austin Traylor each had a pair of receptions to lead Detroit in that category. Defensively, Fred Jones recorded Detroit’s only sack while Andrew Adams led the Lions with 6 tackles and Miles Killebrew and Amani Oruwariye each had 5 tackles in the defeat.

The Houston Texans will also be looking for their first win of the preseason after a 28-26 defeat at the hands of Green Bay in their last outing. Joe Webb III saw all of the action at QB, throwing for 286 yards, a touchdown and a pair of interceptions on 25 of 40 passing while also leading the Texans in rushing with 47 rushing yards on 6 carries. Karan Higdon Jr. had a team-high 8 carries for 37 yards while Damarea Crockett and Josh Ferguson each had a rushing touchdown. Tyron Johnson led Houston’s receiving group with 48 receiving yards while Stephen Louis, Steven Mitchell Jr. and Jerell Adams each had a team-high 3 receptions with Adams logging Houston’s lone TD catch of the game. Defensively, Bradley Roby led the Texans with 3 tackles while holding Green Bay to 237 yards of offense in the losing effort.

Preseason football is hard to bet in all honesty, as anything can happen and you never really know how much playing time certain key guys are going to get. It’s all about depth as well in my opinion, and I don’t want anything to do with Detroit right now after losing savage and having to bring in Josh Johnson after getting down to what’s essentially a 4th string QB in that depth chart. Houston has the better team in my opinion and have the advantage of playing at home, so I’ll lay the points with Houston in this one.