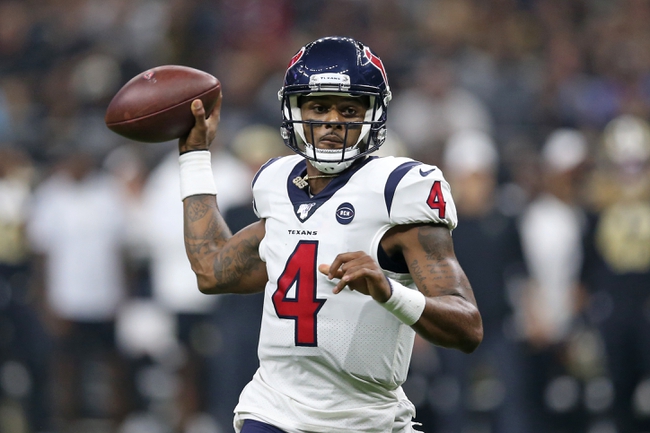 The Jacksonville Jaguars and the Houston Texans meet in a week 2 AFC South division matchup from NRG Stadium in NFL action on Sunday afternoon.

The Jacksonville Jaguars will look to rebound after losing their season opener to the Kansas City Chiefs last time out by a final score of 40-26. Nick Foles threw for 75 yards and a touchdown on 5 of 8 passing, before breaking his clavicle in his Jags debut, placing him on the injured reserve for the foreseeable future. Gardner Minshew II took over in relief and threw for 275 yards, 2 touchdowns and an interception on a very efficient 22 of 25 passing. Leonard Fournette led the Jags with 66 rushing yards on 13 carries while DJ Chark Jr. had 4 catches for a team-high 146 receiving yards and a touchdown. Chris Conley led Jacksonville with 6 catches for 97 yards and a touchdown while Dede Westbrook had a receiving score as well in the loss. Defensively, Jarrod Wilson, Jalen Ramsey and Ronnie Harrison each had a team-high 5 tackles as the Jaguars allowed the Chiefs to log 491 yards of total offense in the game.

The Houston Texans will look to bounce back after a heartbreaking start to their season, letting one slip away in a 30-28 season-opening loss to New Orleans last time out. Deshaun Watson threw for 268 yards, 3 touchdowns and an interception on 20 of 30 passing while also rushing for 40 yards and a touchdown. Carlos Hyde had a team-high 83 rushing yards while Duke Johnson added 9 carries for 57 yards. DeAndre Hopkins led the Texans in receiving with 8 catches for 111 yards and 2 touchdowns while Will Fuller V had 69 receiving yards and Kenny Stills had 3 grabs for 37 yards and a touchdown. Defensively, Whitney Mercilus had a sack and an interception while Bradley Roby had a team-high 8 solo tackles and an assisted tackle.

I’ve gone back and forth on this game, as Jacksonville looked decent when Minshew took over the offense, but this is still a Jaguars team that isn’t as good as a lot of people think in my opinion. On the other hand, the Texans went through a roller coaster of emotions in their opener, marching down the field in the last minute for a game-tying touchdown, missing the PAT, and getting a second chance on a penalty only to let New Orleans march down and nail a long field goal to win the game. Most letdown spots like that can have a lingering effect that carries over, but I think that can do the opposite for the Texans. Houston is a very good team and earned some respect after going toe to toe with one of the NFL’s best. I’ll lay the points with Houston as I see the Texans bouncing back and winning this one by double digits.