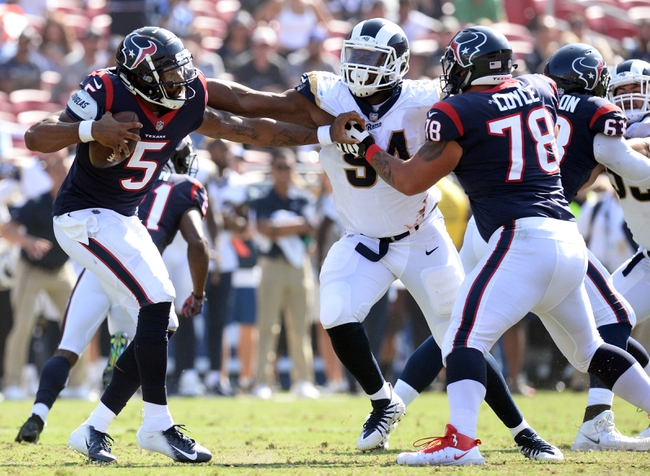 The Los Angeles Rams are 1-2 in preseason play after a 10-6 win over the Denver Broncos. Brandon Allen and John Wolford combined for 226 passing yards and one touchdown. John Kelly led the Rams with 32 yards on 10 carries, while Mike Thomas had 76 receiving yards on three receptions. Defensively, Travin Howard led the Rams with eight tackles, John Franklin-Myers had one sack and Dakota Allen had one tackle for loss. The Los Angeles Rams are allowing an average of 11.3 points through three preseason games and are coming off a contest where they allowed an average of 3.7 yards per play. The Rams haven’t done much offensively in these games, but you have to like how clean they’ve been and how the defense has gotten after it in all areas. The Los Angeles Rams have split their last six preseason games.

The Houston Texans are 1-2 in preseason play after a 0-34 beatdown last week to the Dallas Cowboys. Joe Webb and Jordan Ta'amu combined for 88 passing yards, zero touchdowns and two interceptions. Karan Higdon led the Texans with 28 yards on 13 carries, while Jordan Thomas had 33 receiving yards on two receptions. Defensively, Johnson Bademosi led the Texans with seven tackles, Tracy Sprinkle had one sack and J.J. Watt had one tackle for loss. The Houston Texans had just eight first downs and were 1-14 on third down in their last game, and they lost running back Lamar Miller for the season with a torn ACL. It seems like the Texans just can’t catch a break these past couple of years with injuries and this season is already heading in the wrong direction. The Houston Texans have won four of their last seven preseason games.

I'm not laying chalk after how poorly the Houston Texans looked last week, as their backups did absolutely nothing on either side of the ball. The Los Angeles Rams haven't gotten much from their offense this preseason, but the defense has gotten after it in all three games and Brandon Allen had his moments in the last contest, so maybe there's something left for this game. Either way, give me the points.