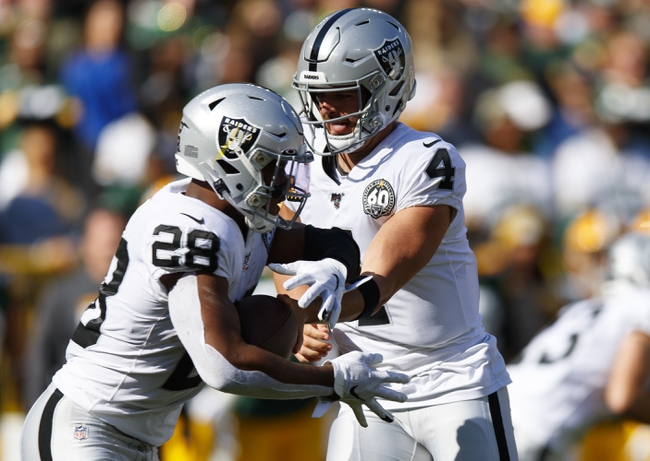 Derek Carr finished the game with 293 yds, while completing 22 of 28 pass attempts in the loss to the Packers.  He also had 2 passing touchdowns.  Josh Jacobs rushed for 124 yds on the day and added 3 receptions. Tight end Darren Waller had 7 receptions for 126 yds and 2 scores in the loss.  The raiders out gained the Packers offensively 484 to 481. The Raiders had 8 penalties in the game.

The Texans saw their quarterback Deshaun Watson complete 23/34 passes for 308 yds and 1 touchdown. DeAndre Hopkins finished the game with 9 receptions for 106 yds and a touchdown.  The Texans in the game rushed for 100 yds on 24 carries. Kicker Ka'Imi Fairbairn was a perfect 3/3 on the day with a long of 47 yds. The Texans committed 2 turnovers in the game.

The Raiders are 3-3 ATS this season.

The over is 3-0 when the Raiders are the away team.

The Texans are 1-2 ATS as a home team this year.

The over is 4-3 this season in Texans games.

This matchup features a potent offense and a defense that gives up points at will.  The Texans are averaging 26 points per game, while the Raiders are giving up over 27 points per game.  While the Texans have one of the best rush defenses, the same can't be said for their pass defense.  Their pass defense ranks towards the bottom in more then a few categories. The Texans rank 29th in passing yds allowed per game.  Look or Carr and Waller to hook up a few big plays that helps lead the Raiders to some red zone opportunities. Both teams should be able to put up enough points to push this total over.  Final score prediction, Texans win and the total goes over 35-24.