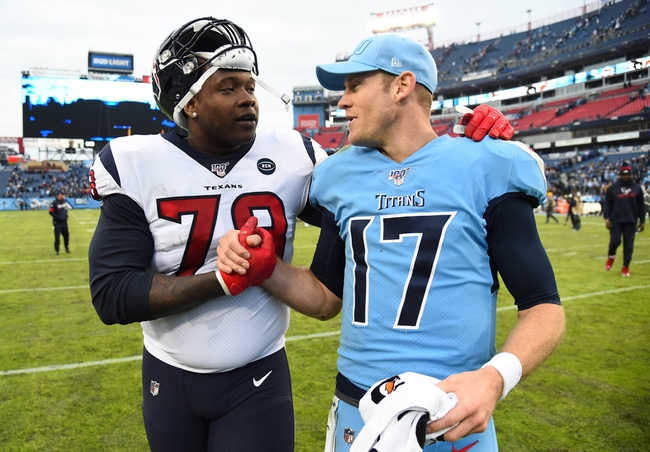 In the Titans loss to the Saints, Tennessee was guided on offense by quarterback Ryan Tannehill.  Tannehill threw for 272 yds on 17 completions, while throwing 3 touchdowns and no picks.  Tajae Sharpe contributed 69 yds receiving on 5 receptions and 2 touchdowns.  The Titans out gained the Saints, 397 to 377.  Tennessee got out to a 14-0 lead and took a 14-10 lead into the locker room.  The Titans were unable to overcome a big 3rd quarter by the Saints.

In the Texans win over the Buccaneers, Houston was led by kicker Ka'imi Fairbairn.  Fairbairn connected on 3 field goals, with a long of 37 yds.  Carlos Hyde added a rushing touchdown in the win.  The Texans were dominated in total yds, bing out gained 435 to 229.  The Texans had 2 turnovers on the day.  The Houston defense was outstanding when needed, the Texans forced 5 turnovers and also recorded a defensive touchdown in the game.

Titans are 2-6 ATS vs a team with a winning record.

The over is 8-1 in Titans last 9 games overall.

Texans are 4-9 ATS vs a team with a winning record.

The under is 6-2 in Texans last 8 games overall.

The Titans have lost 2 in a row, since winning 4 in a row.  One of those 2 losses includes a 24-21 loss to the Texans back on December 15th.  The Texans have won 4 of their last 5 games.  Houston has not had an easy time getting those victories, as the Texans have won all for games by less than 7 points.  The Titans playoff chances hang in the balance of themselves.  The Titans are favored in this spot, as the odds makers see what is on the line for Tennessee. I like the chances of Tennessee getting the job done on the road, as the Titans have the 6th best rushing offense, while the Texans rank 20th in defending the run.  It is hard to go against a 10 win team at home, but with what's riding on the line, it is hard to not side with Tennessee.  Final score prediction, Titans will win and cover, 24-20.