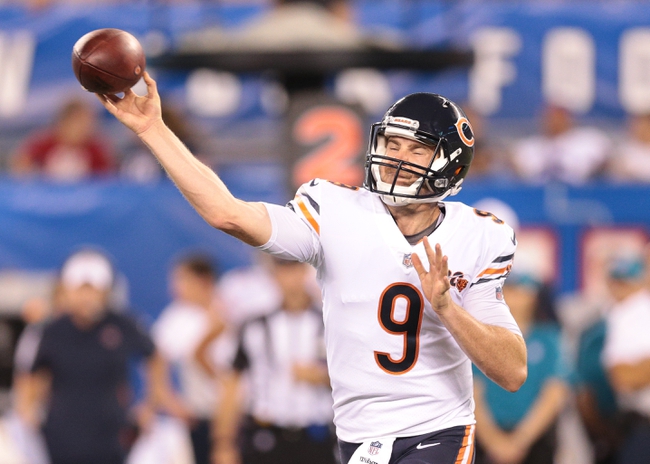 The Chicago Bears and the Indianapolis Colts meet in week 3 NFL preseason action from Lucas Oil Stadium on Saturday night.

The Chicago Bears will be in the hunt for their first win of the preseason after falling to 0-2 with a 32-13 loss to the New York Giants in their last outing. Chase Daniel went 12 of 18 for 103 yards while Ryan Nail put up a team-high 23 yards on the ground and Kerrith Whyte Jr. had a rushing touchdown. Javon Wims had a team-high 5 receptions for 64 yards while Tanner Gentry had 3 grabs for 31 yards. Ryan Nall had 4 receptions for 21 yards and Riley Ridley added 3 receptions as well. Defensively, Isaiah Irving and James Vaughters each had a sack with Vaughters also adding a forced fumble which he also recovered. Nick Kwiatkoski, Josh Woods and Joel Iyiegbuniwe each had a team-high 5 tackles as well in the defeat.

The Indianapolis Colts will also be looking for their first win after a 21-18 loss to Cleveland last time out to push them to 0-2. Chad Kelly, Phillip Walker and Jacoby Brissett each threw for 100 yards with Kelly going 12 of 17 for 115 yards and a touchdown while Brissett had 100 yards and a touchdown. Ace’Cedric Ware had 7 carries for 24 yards while Deon Cain had a team-high 7 receptions for 80 yards. Eric Ebron and Ross Travis each added a touchdown reception as well in the losing effort for the Colts. Defensively, Caraun Reid and Kemoko Turay each had a sack while Khari Willis had a team-high 4 tackles.

Indianapolis laying points at home makes sense, but even though the favorite has had success in this matchup, I still think there’s value to be had with Chicago. Preseason is all about depth and I think the Bears have the better depth of the two sides and should be able to pull out a win on the road so I’ll take the free field goal in a game that I see Chicago winning outright.