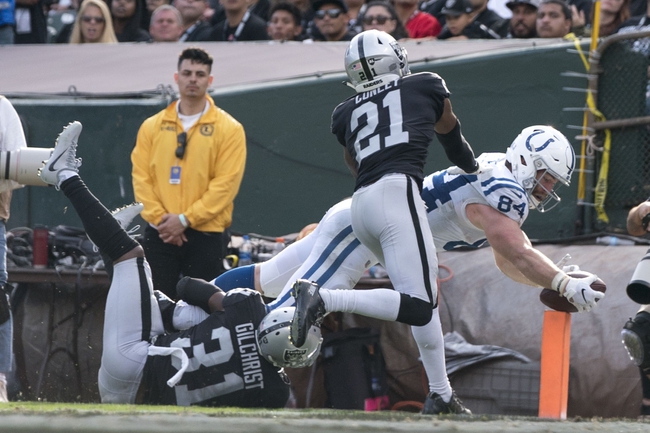 The Oakland Raiders need a strong road victory here to get back to a .500 record. The Oakland Raiders have lost eight of their last nine road games. Derek Carr is completing 73.5 percent of his passes for 699 yards, four touchdowns and three interceptions. Carr has one or less touchdown passes in six of his last nine games. Darren Waller and Tyrell Williams have combined for 447 receiving yards and three touchdowns while Hunter Renfrow has nine receptions. The Oakland Raiders ground game is averaging 105 yards per contest, and Josh Jacobs leads the way with 228 yards and two touchdowns. Defensively, Oakland is allowing 26 points and 398.7 yards per game. Karl Joseph leads the Oakland Raiders with 18 tackles, Benson Mayowa has 3.5 sacks and Clelin Ferrell has two pass deflections.

The Oakland Raiders have failed to cover 11 of their last 14 games when road underdogs of at least three points. The Indianapolis Colts are 4-4-1 ATS in their last nine home games when favored of at least three points. The Raiders have looked awful since their emotional season opening victory over the Denver Broncos, and you can say they've played two really good teams in the Chiefs and Vikings, but I think it has more to do with the Raiders being the Raiders. The Colts are banged up as all hell and have been in three straight tight games. With that said, I'm not running to the window to bet on the Raiders, a team that lacks depth and honesty isn't a good football team. The Colts are finding ways to win and that should build character to help them put away the bad teams. I'll take the Colts by double digits.